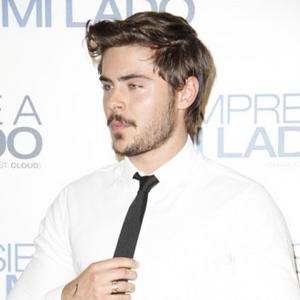 Zac Efron celebrated the UK premiere of his new movie by partying with a sexy girl band.

The 22-year-old actor is currently in London promoting his latest film 'Charlie St. Cloud' and after thrilling his fans on the red carpet yesterday (16.09.10), Zac decided to let his hair down by dancing to some classic 80s songs at London's exclusive Mahiki nightclub with new pop group Beach Girl5.

Speaking at designer Bunmi KOKO's show at London Fashion Week, band member Brooke Adams - who is good friends with Zac's girlfriend Vanessa Hudgens - exclusively told BANG Showbiz: "We're over in London for five weeks and we love it here. Last night we got to go partying with Zac after the premiere of his movie as I'm really good friends with him and Vanessa so he invited us to go out with him. We went to Mahiki and had such a great time. We danced to some 80s music and just had fun, but we're all a little delicate today! And Zac just loved all of the other girls and he really likes our music as well."

Brooke - who is joined in the group by Mandy Jiroux, Dominique Domingo, Noreen Juliano, and Laura New - also revealed she expects to be bridesmaid when Zac and Vanessa eventually get married, although she doesn't think it will be time soon.

She said: "I'd love to be part of the wedding party but I don't think they will be getting married soon as they're both so young. But they are really happy together and they've been an item for over five years, which is a long time. I think they're meant to be though and they're two of the nicest people you could meet."

Beach Girl5 are currently on a tour of the UK before returning to their native America and will release their debut single in January.