Zac Efron notices ''every single flaw'' when he watches his own films, and can't appreciate them until years after they have been released. 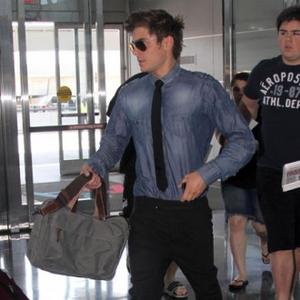 Zac Efron hates watching himself on screen because he notices "every single flaw."

The 'Charlie St. Cloud' actor - who rose to fame as Troy Bolton in the hugely successful 'High School Musical' movies - admits that it takes a long time before he can appreciate his own performance in his movies.

He explained: "As far as watching myself on screen, I tend to, especially the first time around, pick out every single flaw, or things I could have and should have done better. I don't know why, but I tend to dwell on those things. I'm more of a cringer, at first. And then, when it's years down the road and it's out of the way, I can look back and appreciate it somehow."

The 22-year-old hunk - who has been dating actress Vanessa Hudgens since 2005 - revealed that Leonardo Dicaprio is his inspiration as he tries to make the transition from teen idol to serious actor.

He said: "I think Leo is a guy that's been through all this. I'm sure he knows how this felt, at one point or another, and he just continued. He persevered and stuck to his guns, and went through the best and the worst of times. He made cool movies, and some that didn't work so well. Regardless, he's doing it and he's survived and, just now, he's starting to make some of the coolest movies of his career."

And Zac admitted that he would love to make a comic book movie someday in conjunction with his production company Ninja's Runnin' Wild.

He said: "We have a couple of things at Ninja's Runnin' Wild that are from graphic novels, that we are adapting right now. We've got a great one, called 'Fire', that Brian Bendis is writing right now. That's a bit more action/thriller with some spy elements. We're definitely trying to find that kind of thing, for sure."