When their comedy Neighbors (aka Bad Neighbours) became a break-out hit in 2014, Seth Rogen and Zac Efron found themselves being asked constantly about making a sequel.

But Rogen, who also produced both films and cowrote the sequel, wanted to make sure the moment was right. "A few things made us want to do a sequel," he explains. "We thought that the theme of growing up had an organic place it could go. And that the characters were interesting enough that maybe you would like to see what happened next in their lives. And that could be relatable as well." 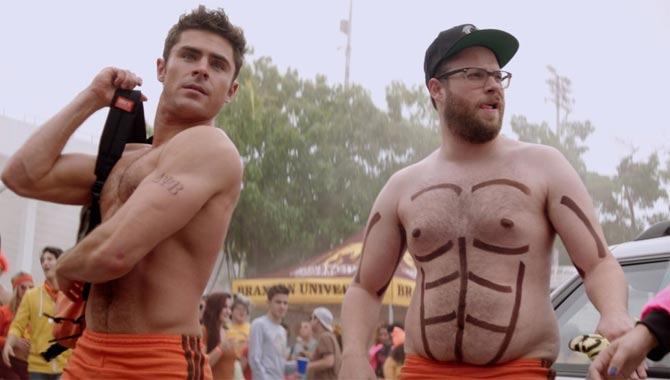 For Efron, returning to the role was a no-brainer. "I was excited about the potential for a sequel because I just really love this group of people," he says. "So I just felt that there was more to do with this group. And rather than just like write a whole new movie that we'd all magically fit into, it was convenient that they came up with a sequel! So I was really happy."

Rogen laughs when he thinks about the difficulty of coming up with a new story for these characters. "It's hard finding an idea that warrants a sequel's existence," he says. "I think we did that. I think you have to make it what's next rather than what's more."

Indeed, while the basic plot essentially parallels the first film, the characters have all moved a bit further along in life. "My character Teddy is having a very early midlife crisis, or actually a quarter-life crisis, which is a thing now," Efron says. "And he comes across these girls who are forming a sorority and kind of starts to mentor them."

Even though it's a silly comedy, the movie places Teddy at an emotional point in his life, which was a lot of fun for Efron. About the scenes when Teddy bursts into tears, he says it took "lots and lots of practice. And thinking about the Beach Boys song Wouldn't It Be Nice."

He goes on to admit that he tried crying on cue when he was pulled over by a traffic officer. "It was a lady cop, and she just melted," he says. "And then she asked for a headshot, and I was like, crying and signing it. She was like, 'I honestly wasn't going to give you a ticket. You just need to change your registration.'"

Watch the trailer for Neighbors 2: