We Are Your Friends Resonated With Zac Efron

While talking about his new drama We Are Your Friends, Zac Efron has been unusually thoughtful.

Clearly, playing an aspiring DJ touched a nerve with the 27-year-old actor, whose career began as the singing-dancing star of High School Musical and Hairspray.

He remembers his introduction to We Are Your Friends, watching a sizzle reel before he even read the script. "I think what was on my mind at that moment, and what's always on my mind when I first meet for a project, is what does it mean to me," he says. "I was just caught up in how much I was really engaged with the material. And that's always scary, because it feels like you might be committing to something."

Watch the trailer for We Are Friends:


And this feeling of connection continued into the production. "While we were making the movie, I knew that we were telling a story that I just knew," he says. "It represented what I was going through at a certain time of my life. I just hope it means something to a lot of people."

More: Read our review of We Are Your Friends

For Efron, music and movies naturally go together. "Music can be the pulse of a film," he notes. And this movie also got him dancing. "They wanted to bring in a choreographer, and I remember sitting with [costar Emily Ratajkowski] and she was like 'Let's just go do it!' Yeah, she was awesome. She was like, 'Yeah, no choreographer. We're good.'" 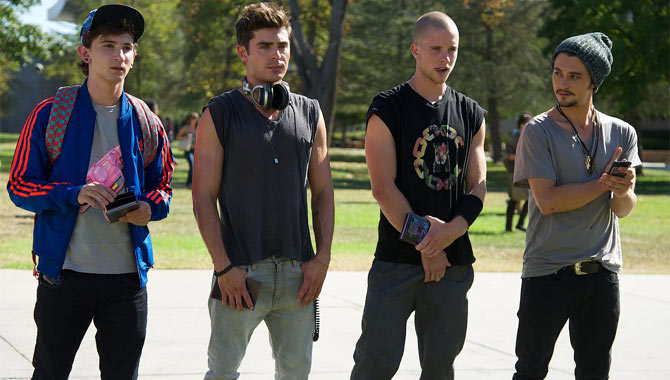 Despite connecting with his character, he doesn't think he has a new career behind the decks. "I probably won't be DJing or hosting any club things," he laughs. "I'm pretty busy with work at the moment. My life has been such a whirlwind. I think as long as I'm learning and growing and continuing on my path, I'm figuring out who I am. I feel alive. I think now more than ever I have a true sense of who I am and what I aspire to do, and that's a good feeling!"