'That Awkward Moment' has, in a fairly awkward fashion, entirely failed to entertain critics.

That Awkward Moment, starring Zac Efron, has been heavily criticised in reviews.

That Awkward Moment has been panned by critics.

Zac Efron stars in That Awkward Moment as Jason, one of three friends (played by Miles Teller and Michael B. Jordan) who struggle with addressing the moment in a romantic relationship when a couple has to decide where their romance is heading. Each of the friends has a girlfriend (Imogen Poots, Mackenzie Davis and Jessica Lucas) but none are certain if they truly want to settle down with their prospective partners.

Most aspects of the film have been heavily criticised by reviewers who feel the film lacks substance, a meaningful plot or any character with a hint of depth.

The attempt at evolving the romantic comedy genre has evidently failed miserably with critics comparing That Awkward Moment to a male adaptation of Sex and the City (L.A. Weekly), which pretty much says it all as far as depth of character or meaningful storyline is involved. Kyle Smith's particularly scathing review (New York Post) describes the film as "A rom-com for dudes that seeks to outdo the ladies by being even more insipid, formulaic and contrived than anything Katherine Heigl has ever done." Sadly, for anyone who has the misfortune of seeing a film with Heigl starring, making a film even more "insipid" surely must be an considered an art form.

Watch the movie trailer for That Awkward Moment - Redband trailer:

Some critics have also been infuriated by the movie's outdated story line. Betsy Sharkey (L.A. Times) feels the film has serious misogynistic elements, she wrote "What Awkward is actually about, albeit unintentionally, is how passing off misogyny for comedy has gotten so terribly passé, as insulting to the guys as to the young women."

Contactmusic critic, Rich Cline, summed up his review, and the general feeling of critics across the board, with "There's some mindless fun to be had here, but the flimsy script leaves it ultimately meaningless and forgettable."

That Awkward Moment, if reviews haven't put you off seeing it, is released in the US on 31st January whilst in the UK the film has already been released earlier this week. 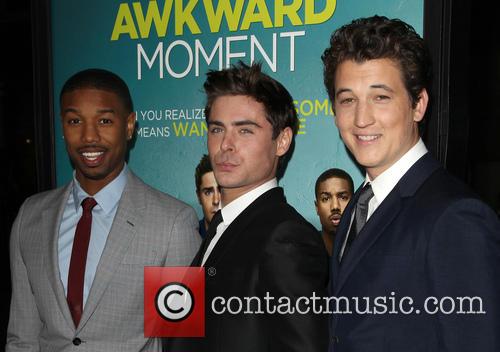 Michael B. Jordan, Zac Efron and Miles Teller at the L.A. premiere of That Awkward Moment.

See more pictures from the premiere of That Awkward Moment.