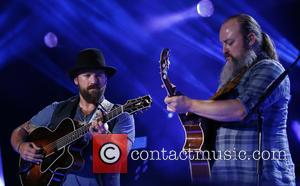 The Zac Brown Band were performing at Summerfest in Milwaukee, Wisconsin when an audience member jumped up onstage and made his way towards Brown.

Fearing the fan did not have the best intentions, the Houston Texans football player, who was watching the show from the side of the stage, dashed to his pal's rescue.

The 26-year-old football player tackled the man to the ground and then let the real security guards escort him off the stage.

Watt tweeted footage of his fan encounter on Monday (29Jun15) with the caption, "Nobody messes with @zacbrownband."