Younghusband's new single, Constantly In Love, is available through Sonic Cathedral. It is taken from their upcoming four track EP, Crystal, which will be released on November 21st, 2011. Younghusband will be playing three shows in the UK towards the end of November 2011, alongside Diagrams; To Wounded Birds and Wild Palms.

London quartet younghusband formed in 2010 and comprises Pete Baker (drums/pads); Adam Beach (guitar); Joe Chilton (Bass/vocals) and frontman Euan Hinshelwood (vocals/keyboards/ guitar), who is also a member of Emmy The Great. They made their live debut in the same year at Truck Festival. Their new EP was recorded with the help of The Oscillation's Demian Castellanos and Jimmy Robertson.

Crystal is the follow up to the double A side Carousel / Nothing,Nothing, which was released in June 2011
through Too Pure and gained younghusband many fans, including: Marc Riley; Pulp's Jarvis Cocker; Zane Lowe and Guy Garvey. 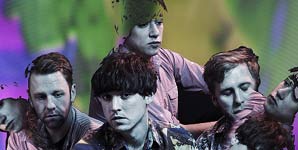