British quintet Young Guns rounded off an intimate live show at The Louisiana in Bristol with their highest charting single yet 'Bones' - the title track from their 2012 album which reached number two in the UK Rock Chart.

The video from the show sees singer Gustav Wood thanking the crowd for coming to the gig and generally supporting them through their musical ventures as the band break into their final song from their Bristol set. Gustav commands the crowd like a rocking puppeteer encouraging them to buy merchandise from their supporting bands and easily getting them to sing back harmonies to him. Though it was an intimate show holding only 100 music lovers, the band fuelled the crowd with amazing energy as they belted out this driving rock anthem perfect for a spectacular finale.

The concert took place as part of the 2013 #StandForSomething Tour brought to you by Dr. Martens - a shoe brand that have stood up for non-conformity, individuality and unity since its inception. Young Guns; who are Gustav, guitarists Fraser Taylor and John Taylor, bassist Simon Mitchell and drummer Ben Jolliffe; have a few more UK dates set for late November and early December and will be hitting Miami, Florida next year for a string of dates at Shipwrecked. As well as that, the group have promised 'We'll be back next year!' - so expect another UK tour soon! 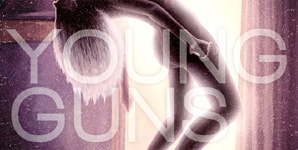