Yoko Ono Was Surprised Ringo Starr Was The Last Beatles Member To Be Inducted Into The Rock And Roll Hall Of Fame Because She Considers Him "The Most Influential" Of The Fab Four. 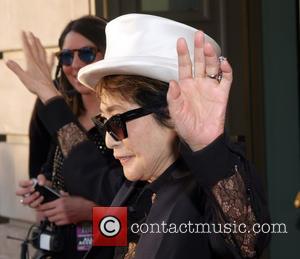 Picture: Yoko Ono - Photo's of a host of rock and roll stars as they attended the the Rock and Roll Hall of Fame Inductees 2015...

Drummer Starr was the last member of the band to be inducted into the Hall of Fame as a solo artist on Saturday (18Apr15), and John Lennon's widow is shocked he waited years after his bandmates to receive the honour.

Speaking backstage at the induction ceremony, she told Rollingstone.com, "No one is probably going to believe it but he was the most influential beatle... For some reason John got it, then George got it, then Paul got it... So why didn't they think about Ringo?"

She also praised Starr's personality, adding, "John would go up and down and all that... but Ringo was always just very gentle. And he really believed in peace and love."

Ono also admitted she was sad Starr's late bandmates Lennon and George Harrison could not not join Sir Paul MCCartney in honouring Starr at the ceremony in Cleveland, Ohio.