The accompanying music video is a home-movie style collection of footage of the band generally messing around and having a laugh with their Grammy winning new collaborator both on and off the stage. It's a wonderful touch that adds to the upbeat mood on this brilliant funk-rock track. Joss Stone's legendary soul voice adds an infectious pop flair to the track and contrasts beautifully with lead singer Matt Sellors's throaty vocals. Matt has admitted that he was pleased with the results despite not initially writing the track as a duet. 'The addition of female vocals seemed to add clarity to the lyrics, and in a way, make the song complete', he said.

Are they ska? Jazz? Rock? Quite frankly it's impossible to stick Yes Sir Boss into a single category; just try it with recently released debut single 'Not Guilty'. Yes Sir Boss have become the first band to sign with Joss Stone's label Stone'd Records. 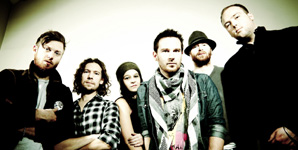