Yellowire's new single, 'Starlife', is available to download from iTunes and was released through independent label, 'id Records'. It is taken from his debut album, 'Machines on Fire', which will be released on August 15th.

The video - which took over 700 hours to create - was directed by Marcus Lyall, who has previously worked for the likes of the Chemical Brothers and Bon Jovi. It has been described as 'groundbreaking'; while Yellowire sings, over 60,000 individual frames, which were photographed and converted into video format, are assembled in a way that makes it look like it's moving, creating an indescribable and amazing sight.

Ol Beach formed Yellowire in 2008, after the short success of his previous band, Wire Daises, who had number ones in the UK and France and who had toured with Robbie Williams and Starsailor throughout Europe and South Africa. As a child, Ol Beach grew up in Switzerland before studying at the Montreux Jazz Conservatoire. His father, Jim Beach, has been the manager of legendary rock band Queen since 1978. 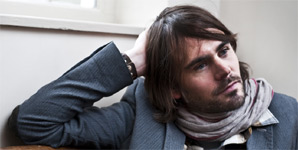