Xombie's new single, St. Beautiful, is available on their debut full length album, Swaggaholix: Deluxe Edition, which will be released on February 1st, 2012. Their cover of 50 Cent's well known song In Da Club is also available as a free download.

The video for St. Beautiful sees Xombie performing on a roof in their native New York. There are many interesting choices of camera angles used, including placing a camera on the instruments and mic. Xombie play in the sunshine and at the end, a shot of them relaxing with beers is shown.

Formed in 2009, Xombie are: Adam Cruz (vocals); Roy Galvan (guitar/vocals); Robert 'Fish' Fishkin (guitar/vocals); Mike Martabano (bass) and Rob 'Bangers' Patierno (drums). They are influenced by System of a Down; Rage against the Machine and Jay-Z and have dubbed their sound 'Hood Metal' - a combination of rock, hip-hop and metal.

They have released two EPs thus far: the self-titled EP in 2010 and Swaggaholix in 2011. They were recorded at Nada Studios in New Windsor, NY and produced and engineered by John Naclario and Eric Castillo, the latter of whom has worked with bands such as My Chemical Romance and The Ataris. Xombie announced that they would re-release the tracks from their EPs on their debut LP Swaggaholix: Deluxe Edition. 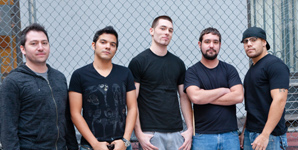