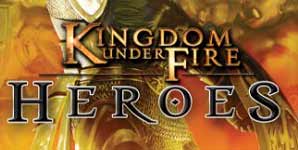 Kingdom Under Fire: Heroes is an Action/RTS game that puts you on the front line of amazing and expansive fantasy battles. You can hack and slash your way through many weird and wonderful armies and monsters and use cunning strategies to tip the battles balance and win freedom for your race.

Kingdom Under Fire: Heroes sets a scenario where tensions between the various breeds that share the land of Bersia are reaching boiling point. Elves, Vampires, Orcs, and Humans have had enough of living next to each other in peace and decide to get physical.

A war breaks out when a small town near the Eastern border of Hironeiden is pillaged by an army of unknown origin. Each of the seven heroes has his/her own campaign revolving around this great war to decide the fate of all mortals. The story takes place in the same time frame as the predecessor game, Kingdom Under Fire: The Crusaders, but is based on the events that took place before the war, hidden incidents during the war, or decisive battles that were not in The Crusaders.

Kingdom Under Fire: Heroes retains the same magic format of real-time strategy and frenetic action of The Crusaders, but there are more characters and a few more units this time around.

When starting a new game you choose from seven different campaigns. You can choose to control any of the four races. Within each race you can also choose a leader, the leader is the character you will control throughout the campaign. Most races have one male and one female general, and your favorite characters from The Crusaders are all present. Each campaign has a unique storyline although because all the events are taking place simultaneously, the campaigns are all interlaced through the game.

When it comes to controlling your army in battle if you have played Kingdom Under Fire before you shouldn't encounter two many problems. On the other hand if you are new to the control system you may find it a bit of a handful at first. While in battle you can control as many as four units plus your main unit, this is the RTS side of the game and works like any other RTS. You can deploy your men to various parts of the map to gain a good position to wage your war. You can quickly flick from one unit to another by using the shoulder buttons. This means at any one time they can be acting individually at different points of the battlefield or bring the troops together for a combined effort. There is also a map of the battlefield available although most off it is hidden in fog. You can activate the map while in battle and use the map to dish out orders to advance, retreat or regroup.

As soon as your main leaders group engages in battle you take control of the leader on the battlefield. This action is akin to the likes of the Lord of the rings titles, lots of slashing and movement. What you get is a fighting game control system with special moves, combos etc.
When in the heart of a battle the chaos that surrounds you is one of the defining features of this game. The shear number of warriors on screen is great, flaming arrows paint the sky, cavalry charge down out of the forests and dragons breathe fire from the skies.

There is much on the market to match this chaotic action and this is where Kingdom Under Fire: Heroes is really strong.

Back to the strategy, when your army is at base you can customize the look and attributes of all your troops. When fighting you win gold and experience points for showing valor on the battlefield. The gold can buy you all kinds of things. You can upgrade weapons and armor hire mercenaries and expand your units. The experience points are used for leveling up your leaders and armies and upgrading your troops. Many unit types are available.

The major advancement from Crusaders to Heroes is the online play. You can have up to six online players per battle. You can team up or face off against your online buddies.

Graphically Kingdom Under Fire: Heroes rocks! As I mentioned before in the battles there is an immense amount of action on your screen at once and the character animation is all very smooth and clean. The feeling it gives is it is like being in the middle of one of the battles from the LOTR's movies. Scale plays a big part in the game and some of the monsters are massive. The sky is also alive with assailants. The camera control leaves a bit to be desired and only masterful control will keep your eyes where they need to be. The troop customization is also executed well and this can help you in the heat of battle.

The sound isn't too hot I'm afraid. The soundtrack is heavy metal madness. This is all well and good, nobody can argue that heavy metal isn't the tune of war but after a while the dross music starts to hurt. The voiceovers are also pretty ropey I think a lot of the meaning has been lost in translation, although, the on battlefield noises are all pretty good.

If you were a fan of Kingdom Under Fire: Crusaders then Kingdom Under Fire: Heroes isn't going to disappoint. The core of the game and the graphics are fairly similar to before but the extras such as online play make this by far the more complete title. If you are new to Kingdom Under Fire games and fancy experiencing this unique vision of war then tool up and get stuck in. You could do much worse things with your time.