Half-Life 2 is the sequel to one of the most critically acclaimed titles in gaming history and it is now available on the XBOX console. Available only on PC until now - Gordon Freeman, G-man and all the other favorite Half Life characters make their way onto the Xbox looking shinier and sounding crisper than ever before. 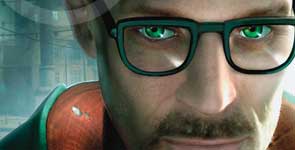 In 1998, Half-Life revolutionized the game industry with its combination of pounding action and continuous, immersive storytelling. Valve's debut title was named "Best PC Game Ever" by PC Gamer and launched a franchise with more than eight million retails units sold worldwide. In 2004, Half-Life 2 took the suspense, challenge and visceral charge of the original to new heights of realism and responsiveness on the PC. Half-Life 2 opens the door to a world where your presence affects everything around you, from the physical environments to the behaviors â even the emotions â of both friends and enemies. You pick up the mantle of research scientist, Gordon Freeman, who finds himself on an alien-infested Earth being picked to the bone, its resources depleted and its population dwindling. Freeman is thrust into the unenviable role of rescuing the world from the wrong he unleashed back at Black Mesa. And a lot of people â people he cares about â are counting on him.

The intense, real-time game-play of Half-Life 2 is made possible only by Source, Valve's proprietary engine technology. The source engine was ground breaking stuff on the PC a year ago with its advanced facial animation system, amazing physics, graphics and AI.

Rag-doll physics have been applied to all the characters so when you shoot someone they literally flop to the floor. Game-play involves Gordon interacting with much of the games environment and anything a real person could pick up or move carries these properties within the game. Anyone who has heard of Half Life2 before will have heard tales of the Gravity gun and super gravity gun that feature in the game-play.

If you have played Half Life 2 on PC then there is nothing new about the Xbox version. In fact there is actually less than on the PC version; this is due to the exception of Counter Strike Source. CS Source is the multi-player element of Half Life 2 on the PC and is with out exception the best FPS online multi-player ever. In the single player mode everything is present and correct; the mission replicates the PC version exactly.

Cinematic action is what set the original Half Life game from the pack. Half Life 2 has these cinematic moments, like when you enter City 17 for the first time, but like any good sequel it doesn't veer too much from what made the original great. So you won't see a massive amount of new features but what new features are there are pure quality.

The Weaponry within Half Life 2 is fantastic. Weapons are designed, in my opinion, with the most realistic detail, recoil and accuracy in any game, ever. The gravity engine will blow your mind! Every element of the background is moveable and will follow the laws of gravity perfectly. How this feature is woven into the story is genius.

Team play features in the game. Most of your journey will be undertaken alone but some of the game-play highlights come when you team up with the in-game characters, both human and alien.

Anyone who played the first Half Life will know the storyline was a major attraction. As Gordon progresses through Half Life 2things start getting stranger & stranger . This all comes together in the game with an unforgettable end scene, Half Life 2 picks up from this point but doesn't reach the same dizzy heights as far as the story goes. This leaves you feeling like you have completed the middle section of a story rather than having experienced a full tale. The ambiguity does leave the door open for the next installment but after all your hard work and effort you do feel a little disappointed.

Half Life, on the PC, has previously been controlled with a keyboard and mouse. The controls do translate to the Xbox controller fairly well and as far as walking, shooting and jumping go it feels just like Halo. There is no argument as to the precision of a mouse against a joystick and Valve has combated this by adding an auto-aim engine to the Xbox version. This means accuracy isn't quite so important.

Graphically Half Life 2 looks excellent on Xbox. The backgrounds are beautifully created and the attention to detail in all aspects of the game is fantastic. Most of the time the frame rate is descent but due to the gravity engine you can experience slow down when you move lots of individual items at once. Sound is superb, all the weapons sound amazing and the audio atmosphere is generally really great and the vocal acting is also very good.

Overall Half Life 2 has been converted for Xbox with love. The Xbox graphical capabilities show the game off in a good light and even though the PC version is over a year old the look of the title is still cutting edge. The control system takes a bit of getting your head around if you are used to the PC version but if you play Halo you will be fine. The main problem is once the single player mission is completed there isn't much more on offer. All that said, if you have never had the Half Life experience then you are in for a treat. Prepare to play one of the best games ever made.