Skateboarding cool has been in resurgence this year largely due to Chicago rapper Lupe Fiasco's classic old skool hip hop ode "Kick Push". What better way to quench those newly flowing board lust juices than another release in the definitive boarders title Tony Hawk's. 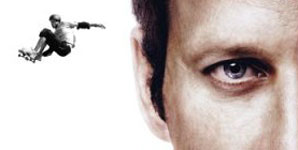 Project 8 is, in its essence, an incremental evolution from the past release but for the first time the title has been constructed - from the ground up - for the 3rd gen consoles. This is Tony's second outing on the Xbox 360 but for the first time the full power of the machine is available to the developers, Neversoft, as previously the graphics were constrained by the PS2 and Xbox versions. So, as you can imagine the first impression you get from Tony Hawks Project 8 is the graphical advancements, which are huge. Project 8 features full 3D body scans of pro athletes and motion captured skateboard tricks. You have the freedom to progress through the game in multiple ways and decide the type of pro skater you want to be.

Project 8 is without doubt the most unique, robust and realistic skateboarding game experience, offering more goals, side-missions, secret areas and mini games than any other Tony Hawk game. Your skater interacts with other Pro's in the game and this gives Project 8 more entertainment value than previous versions. You can track your stats with new in-game record keeping, switch characters mid-game to accomplish a goal, or just skate how you want to skate.

The new physics system introduces advanced grinds and bails that allow players to control falls and minimize or maximize damage for fun with the innovative new rag-doll bail mode. A greater sense of momentum and gravity is impossible to miss, and provides the most realistic physics so far.

Tony is back in town searching for the best 8 skaters around to form his Project 8 team. You start out at the bottom of the pile in position 200 and your goal is to work your way through the ranks and eventually into Tony's supreme team. The way to climb the ranks is to complete goals and you can free roam around looking for new goals and unlocking new parts of town to increase your all important rank. There are many goals on offer, chalk line grinds, skate demos, photo and filming goals. You can also set up your own stunts with the moveable ramps and rails kicking around the city and also build up your street cred by impressing the city's inhabitants.

The city itself is excellent. Never before in a Tony Hawk game has the city felt so seemless. Instead of various areas split up by loading screens there is a brilliant free roaming feel to the city and you can also zap from one end to the other.

The main new feature in the game is a new trick mode called "nail the trick". You enter this trick mode by pressing in both analogue sticks at the same time. The camera will go into a slow motion view and give you a very close look at your own feet on your board, while flying through the air in slow mo you can use the 2 sticks to perform some very fancy footwork, flipping your board and doing some quality mid-air dancing.

Online support was almost invented by the TH's series and what is available on Project 8 is both solid and fun. These elements will keep you and your friends coming back to this title for sometime.

Graphically Project 8 is looking really sweet, or "sick" even. As I mentioned earlier P8 has been built from the ground up for the new and more powerful consoles giving Activision and development team Neversoft a good chance to review some rather stale animations that have been kicking around for too long now, painting a beautifully constructed world for your skater to explore. The slow mo feature adds an extra level of intricacy to an already intricate game and this all comes together to create a stunning graphical experience.

Sound-wise the sound effects are better than ever and the soundtrack bumps. The soundtrack is incredibly varied and covers almost all musical genres. There's some old stuff on there for the 30 something's and lot's of scorching new music like The Klaxons, Wolfmother, Gnarls Barkley and many more.

Overall I think this is the best Tony Hawk's title for sometime. Neversoft have finally broken the old mold and marched out into new ground reassessing what it is that makes for a great skating game and maximizing the fun for all. Previously TH's has been a tricky game for the new player to adjust to but with the new tutorial mode and the free roaming style anybody can pick this game up and enjoy it instantly. For those pro skaters out there, becoming one of the select Project 8 is a worthy challenge and an honor to work towards.