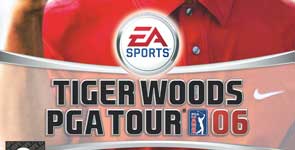 Tiger Woods is an established game that has matured as each new version has arrived. The PS2 and Xbox versions of Tiger Woods 2006 featured a new swing system that was controlled on the left and right analogue sticks. The left hand analogue stick was used for the back swing, simply pull the stick back and then push it forward in a smooth fluid motion. The right hand analogue stick was used to control the amount of spin and fade. Then you had to press the power boost button very quickly to make sure you shot was good and powerful. The only problem with the PS2 and Xbox versions was the complete lack of challenge.

The Xbox 360 version uses the same control system but there are a couple of noticeable differences. The 360 version seems to have a far more sensitive swing control on the left analogue stick. When you first play the game you will be quite shocked at how easy it is to hook or slice a shot by mistake. So making a good backswing and following through with a straight shot is now far more challenging. The other change is the power boost button which is allocated to the left hand shoulder button on the 360. As you can imagine pressing the left shoulder button quickly and trying to pull off a smooth action on the left stick is extremely challenging. It's so tricky that you will experiment and try holding the controller in unusual positions. You will find a better way to hold the controller to get better results from the game. So far it seems that Xbox 360 version of Tiger has one up on the PS2 and Xbox, which is unusual when Madden and FIFA are superior on the old consoles.

The core of the single player game is in the career mode, but you won't find all of the extras that were in the PC, PS2 and Xbox versions of the game such as foursomes and the time travel mode. On the 360 version you create a player and get straight into the action, right after you complete the four day training course to get your PGA Tour card. The four day training course is basically a number of challenges to test your skill. You will pass some of the challenges within a couple of goes, but some of the challenges are very difficult and can only be passed after you have increased some of your players attributes. The main focuses here are the long drives and other challenges which will require you to play an opponent over a couple of holes using only one club. Practice is the name of the game, but thankfully you will be able to you're your progress after each day of training. Before you think everything is going to be plain sailing for the rest of the game, you would be wrong; the game maintains its unforgiving difficulty curve throughout.

One aspect of the game that could be a deal breaker for the punters is the lack of courses to play. Tiger Woods 2006 for Xbox 360 only has 6 courses to play which is pretty pathetic when compared to the Xbox version which had 14 including the fantasy courses. The only redeeming factor is that all the courses on the 360 version are tough, challenging and they all look fantastic. Plus the game is far more difficult than the other versions so the longevity may not be reduced quite so much as it first appears.

The detail and depth of the graphics on the Xbox 360 is fantastic, especially the courses and Tiger himself. The 360 features some impressive shadows which move with the trees as the wind blows. There is a problem when the ball gets played into the shadow, the shadow around the ball can disappear and reappear making things not look quite so slick as they did, only moments before. The players themselves generally look pretty good. Tiger looks great and have obviously had the most work, but lesser known players can look more like the PS2 and Xbox characters with a slight upgrade. It must be said that the plastic effect has reared its ugly head here too, just like the players in FIFA, skin tones and textures have a shiny plastic look. Tiger also has some issues with frame rate, which is unbelievable considering this is a golf game, not exactly, Need For Speed Most Wanted. As you take your back swing the game can pause or jolt slightly. In normal circumstances this wouldn't be a problem, but it happens in one of the most important parts of the game where timing is paramount.

The sound in Tiger Woods 2006 isn't quite the pinnacle of the game as most of the game in spent in relative quietness. The crowds will cheer for a good shot and jeer for poor shots. There is always some annoying voice that shout out above the crowds cheers, not a problem, but he has only got a couple of phrases and after a while you really want to kill the guy that recorded the voice. The commentators Gary McCord and David Feherty do a decent job of announcing play, they're cheerful and can even be entertaining at times. Music is minimal and subtle which is perfect for a game of this type.

All in all Tiger Woods PGA Tour 06 comes across as a good game. Many people will judge it first by the lack of courses and may not purchase of that reason alone. It does provide a challenge though you know that any shot could go horribly wrong if you don't give it 100% concentration. If you own the same title on PS2 or Xbox you won't find enough here to warrant the price of a new game. If you don't have another copy its certainly worth while purchasing if you want a golf game to add to your Xbox 360 games library.