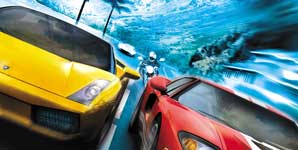 Test Drive series has been one of the longest running franchises in video game history. While being the longest it has also had quite a chequered history. Atari have made a huge effort to put out as much promotional material as possible, a huge number of screenshots and videos have been released in an attempt to increase the anticipation leading up to its release.

The first thing anyone who has seen the screenshots knows is that Test Drive Unlimited is a very good looking game. As well as the beautiful cars the background visuals of the Hawaiian island of Oahu are also very pleasant on the eye.

The real test of Test Drive Unlimited is of course in the game-play. With 150 cars from super car manufacturers such as Lamborghini and McLaren plus regulars in other racing games such as Lotus, Ford, Audi, Mercedes and Dodge lining up plus some motorbike makers such as Ducati and Kawasaki there is plenty to choose from.

The decision of which car to buy is not make or break like it can be in other games such as Gran Turismo. Test Drive Unlimited allows you to test drive cars before purchase which take much of the decision time and risk factor out of buying a car.

Before getting started you have to buy, not just a car but, a house once you have arrived on the Hawaiian island of Oahu. Then you have to do a lot of driving around giving hitchhikers and models lifts around the island. This in itself is quite random and the game feels to have very little direction and story. You begin to stop searching for the story that doesn't exist and get on with driving the available missions, as you progress more and more missions will appear on the screen.

Test Drive Unlimited has a unique way of encouraging you to drive down each road throughout the island. When you start the game there are few mission icons on the map, as you progress the map will become more densely populated with mission icons. To go to an icon you can click on it through the map; if you have been on the road that the icon is located before you will be teleported, if you haven't been on that road before you will have to drive there. This is a subtle way or forcing you to explore and travel each road on the island.

The main problem with Test Drive Unlimited is the lack of variety; races are the usual street race affair mixed with time trails and speed races which involve passing speed cameras at a certain speed or just reaching a speed within a certain time frame. Missions are even more repetitive and involve moving things or people around such as delivering cars to dealers or mechanics, picking up hitchhikers and dropping them at their destination. Anyone thinking they would rather race needs to think again, you will have to carry out the many monotonous missions just to earn enough money to buy numerous cars and houses and any other upgrades you require to race, so you'll have to put up and shut up unfortunately.

Unless you are hooked up to the net, the online world of Test Drive Unlimited really opens up the game and gives you other options to make money. The most immediately obvious is the online trading market which lets you sell your car at what ever price you like. Obviously you don't want to price your car too high as you will scare off any interest. Another way to earn money is to set up challenges and map out a course of virtually any length anywhere within the island of Oahu. Once your circuit is sorted you can set race rules such as entry fee and certain race criteria like time limits etc. The cash prizes given all come from your bank account so you need to keep an eye on how much you offer and how much money you are taking in fees.

Playing Test Drive Unlimited online is similar to the single player game, you won't find any menus listing available races etc, you will still see icons on the map referencing available races. You will have to drive to each race and then wait for the race to fill up with enough competitors; personally I would prefer a menu during quiet times, as it would avoid the amount of waiting you have to do. During busy times online the system seems to work pretty well though and the best racing is always online weather it's busy or not.

The handling is quite unusual Test Drive Unlimited is one of those games you might feel you won't be able to get the grasp of at all to start with due to its touchy handling. Eventually you will get the hang of it, stop spinning out and start attacking the roads aggressively. You will come across both traffic and cops, the cops are not so much of a problem, certainly nowhere near as determined as those in Need for Speed Most Wanted. The traffic tends to become more of a hindrance than the cops ever do. The AI traffic will drive into the side of you and accumulate at busy intersections. The cops never really seem to be bothered about your driving unless you cause multiple accidents in a very short period of time.

Graphically Test Drive Unlimited is very impressive Oahu has been rendered in a huge amount of detail. Even though most of the roads run around the outside of the island there are some roads which will lead you into the country and up mountain roads which provide a great contrast in scenery to the cities and coastal roads. The scenery doesn't look so good when you travel at speed, textures can pop up very late and the frame rate can slow down quite noticeably. The cars are the real eye candy, all look like perfect versions of their real life showroom counterparts. Like Gran Turismo none of the licensed cars have damage modelling which is a shame, for some reason they did give the traffic damage modelling, but it's not very convincing especially in high speed collisions.

Test Drive Unlimited is a pretty good effort and merging offline and online gaming with open ended missions, but it's all a bit too mundane in-between the racing. It's a nice game with some nice ideas and it's certainly worthy of a purchase if you're after another racing game and if nothing else, there is nothing else quite like Test Drive Unlimited that is available at the moment.