Ridge Racer has traditionally been the launch title of Sony's consoles, now Namco and Sony are no longer joined at the hip, Ridge Racer is available for the Xbox 360 shortly after the consoles debut, something that wouldn't have been possible in the years gone by. 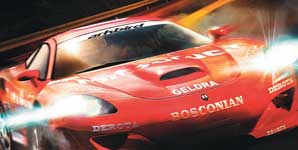 As always and in true Ridge Racer form the handling is completely outrageous. The aim of the game is to put your car in a huge sideways slide at full speed to negotiate the corners. Far from realistic but a huge amount of fun and very satisfying Ridge Racer puts a great big smile on your face as you enter corners with no need to brake. The secret to the handling and playing Ridge Racer is being able to pull off these insane slides without loosing any speed. What ever you know about driving should be thrown out of the window, its not going to help one ounce here.

Drifting and sliding has rewards, in most race types you will have a nitro boost at your disposal. As you drift around corners your boost meter will fill up. The boost meter is made up of three sections, once the first section is full you can boost for a short period. Fill up two cells and the boost will last longer and have double the potency. There is one caveat to the boost/drift payoff. You cannot increase your boost meter while you are using boost. This means using boost to pull off a huge drift isn't going to charge your boost meter. Timing your boosts is all important. Once you have sorted your timing out you can make sure you boost runs out just before a corner which will let you pull off a huge drift, scrub off a bit and speed and in turn charge your boost meter up again.

Ridge Racer starts off as a pretty easy timid game, enabling everyone and anyone to get the hang of racing and drifting. The difficulty level then starts to steadily increase to a point where nothing less than perfection is good enough. This is partly down to the difficultly of the later tracks, but mostly down to the speed of your opponents.

As you progress through the World Explorer mode you will see the same tracks multiple times, sometimes you will race a track in reverse other times you may be diverted down previously inaccessible sections. If this doesn't motivate you, the promise of a nearly endless list of new cars should.

Cars are split into three different classes, mild drift, standard drift and dynamic drift. Mild drift cars aren't too willing to drift and generally corner as a normal car would, they are the slowest of all three classes though. On the other side of the spectrum there are the dynamic drift cars which must be drifted around every corner, they drift wildly with a huge amount of "tail out" and as a result these cars are the hardest to drive but they are the fastest of all. In the middle there are the standard drift cars which will drift easily and effectively and the top speed is only slightly lower than that of the dynamic drift cars.

Graphically Ridge Racer 6 scores well, especially when you compare the frame rate against the slightly slow Project Gotham and the jerky but fast Need for Speed Most Wanted. Ridge Racer 6 keeps a great frame rate and the action is fast and fluid, especially in the later stages of the game with the faster cars, which is something the Xbox 360 has previously struggled with. If you look hard enough you will find some graphical glitches, car model textures can appear blurry at times and the road isn't made of the best looking tarmac ever seen. The backgrounds are definitely worth mentioning, as with all the Ridge Racer games helicopters and planes flying over head are common place, some of the best looking tracks are those which are set at nigh in a brightly lit city. Also worth mentioning, this is one of the first games from the Xbox 360 that looks good whether you are viewing in HD or not.

Sound is just as you would expect, the instantly recognisable Ridge Racer commentator is here although he can start to sound repetitive. The music is again typical Ridge Racer, featuring loads of electronic music that varies from hard to fairly soft. The exhaust notes are not what you would call realistic as they are quite subdued. The tyre squealing is one of the most pronounced and prominent sound effects in the game, as all squeals sound pretty much the same it can become quite irksome.

As with all Ridge Racer games from the past it's fantastic for a quick pick up and play. Ridge Racer 6 also offers huge number of races and cars to unlock which gives the game massive longevity. Once you pick up Ridge Racer 6 you will be hooked by the great trademark blend of speed and way out handling. For an Xbox 360 owner this is a great title to add to your library.