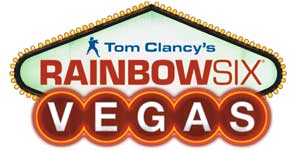 With over 80 million books sold, Tom Clancy is arguably the world's most recognized author. His works include fiction such as The Hunt for Red October, Clear and Present Danger, The Sum of All Fears, Rainbow Six, Red Rabbit, and The Teeth of the Tiger. Clancy also writes non-fiction works about weapons and various military units. Four of his books have already been adapted into highly successful feature films.

Tom Clancy's Rainbow Six makes its next-generation hardware debut in the most dramatic installment of the renowned first-person shooter franchise to date. Rainbow operatives take to the chaotic streets of Las Vegas as an escalating terrorist siege in "Sin City" threatens to take world terrorism to new, uncontrollable heights. The future of global security hangs in the balance as you battle to defend classic Vegas locations and environments like Fremont Street, the Strip and casinos. Experience Las Vegas like never before - through revolutionary next generation technology as you work against the clock to protect one of the world's most recognizable cities from utter devastation.

The stakes are high when the world's most elite counter-terrorism unit enters Las Vegas, where over 36.7 million men, women and children visit each year. "Sin City," the home of the famous Las Vegas Strip, flashy hotels, high-rolling casinos and world-famous celebrities, becomes the setting for a terrorist threat of global proportions. What happens when one of the world's most famous cities is held hostage by terrorists?

Experience a new level of squad-based realism as your teammates, Michael and Jung, offer you real-time tactical suggestions like busting through walls or hacking computers, all in a race against time to locate the heart of the terrorist cell.

Use tactical planning to maneuver through multiple-path Vegas environments while utilizing high-tech equipment such as snake cams to strategically "tag" terrorist targets to your teammates, prior to entering a room.

Prepare yourself for a new level of in-game immersion with real-time mission briefings, all in the midst of the most intense combat ever played.

Next-generation technology brings a higher level of artificial intelligence to Rainbow Six. As you get past the grunts and advance closer to the center of the terrorist cell, encounter deadlier, more skilled enemies who work together as a group to counter every move you make. Create your own multiplayer character that evolves as you play online, while unlocking new equipment and achievements as you go.

Graphically Rainbow Six Vegas is hot! Your team and the city of Vegas have been beautifully rendered and the detail is worthy of a 3rd gen title. From the tiny peices of a craps table being blown to bits to the more breath taking Vegas views the whole thing is a tirelessly produced work of art.

Overall Rainbow six is a new level of Tom Clancy game. It takes the best of the previous titles and expands the play with some natty new features. If you like blasting your way through games then this isn't the best title for you. On the other hand if you like a more tactical shooter then Rainbow Six Vegas will give you what you want. This is the first Rainbow six title on the 360 and it is a gripping and intense triumph.