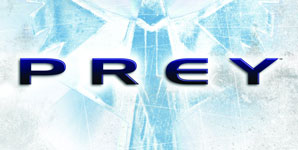 To celebrate the release of Prey on Xbox 360 we have copies of the game an Xbox 360 console and a pair of amazing poweriZer super muscles to give away. * 1 Xbox 360 * 1 pair of PoweriZers * copies of Prey.
**** Click Here To Enter

Prey has been a long time in the making. Back in 1997 the game was shown to the press. Since then Prey has had a very arduous journey to the high street shelves, it's been canned and then some time later adopted by a new developer and powered with the Doom 3 engine. The result is a simple third person shooter that doesn't bring anything new to the table.

You play Tommy a Cherokee Indian that wants to leave the reservation with his girl Jen. Unfortunately before Tommy can let Jen know his intentions aliens come and abduct Tommy his granddad and Jen. Now on a spaceship Tommy breaks free of his restraints and sets off to rescue his girl. As you can tell, this story probably took all of two seconds to dream up.

Prey has a couple of quirks which separate it from other first person shooters. Firstly portals are used to transport you around from place to place. The second area in which Prey differs from other FPS games is the gravity; gravity on the ship changes so you never really know which way is up or down. If you ever get slightly nauseous playing FPS games this one is likely to make you run to the toilet. At times portals are used to good effect, you can be ported to smaller areas and actually shrunk to fit in a glass, but you will find most of the portals will simply act as doorways; however you can see and shoot through portals from the other side. The gravity aspect of the game offers much more. You will see walkways which enable you to walk up walls and onto ceilings. Portals and the gravity can work in tandem as some portals will transport you to rooms you have previously visited but the gravity will be reversed. It can all become quite disorientating.

The level design is very straight forward which means Prey relies on gun battles to keep you playing. The Aliens have the ability to use the portals to appear in your room, sometimes they will appear behind you so you have to keep you guard. The aliens are armed with the same weapons as you, if you are visible, even a long way off the aliens will still be able to pick you off if you stand still for too long. If you are out of the alien's line of sight they may sling a grenade over in your direction. All of the enemies are quite easy to deal with whatever the situation.

As with all FPS games, weapons play a major part in the game. Prey is no different but their execution is probably quite different to anything you have seen before. You start the game with a pipe which you will be able to dispatch your first alien hunter, then you will acquire a rifle which acts pretty much like a machine gun. There is a scope on the weapon which can be used as a sniper rifle. As this is an alien weapon it looks a bit strange, the whole game has a half metal, half organic tissue type look. The gun is no different. The grenades are small creepy crawly creatures that you find crawling on the floor. To detonate you pull off a leg and throw it, if you turn them over you can lay them as mines or use them as sticky grenades. More weapons become available later in the game such as grenade launchers, acid guns and rocket launchers, all pretty standard stuff for the FPS genre. There is a leach weapon too which enables you to leach different types of power from terminals around the spaceship. Depending on the type of power you have leached the gun will fire different projectiles from hot plasma, to electricity to a freeze ray. Since the enemy is never very difficult to deal with many of the weapons are over powered and don't really offer any additional benefit.

As you progress through the game Tommy becomes aware he has the ability to spirit walk. In spirit form you are armed with a bow and arrow, one shot will kill a warrior alien. The main advantage and the only time you need to use the spirit walk is to get past force fields. In spirit form you can still collect ammo which is useful and you can still interact with various buttons and switches. The norm is to use spirit walk through force fields and when on the other side switch them off so you may pass in normal form.

Should you die, you will go to spirit world, here you must fire your bow and arrow at targets to recharge your health and spirit energy, after doing this for 20 seconds you will be sent right back to where you died. Death isn't a big deal and this also does away with all the saves you would normally have to make in other FPS. If you decide to stop playing you simply save the game at that point and finish playing.

The multiplayer accommodates up to eight players in death-match and team death-match. Maps are well designed and the use of portals is much more effective here than in the single player campaign. Unfortunately you cant play split screen you can only have multiplayer games on Xbox live or via the system link.

Ultimately Prey is a decent FPS but it doesn't offer much of a challenge. Any FPS fan will have played better games that Prey before but the portals and gravity twists do make Prey interesting if not entertaining. If you're an FPS fan and you want another game to get stuck in to, Prey will delivery the goods, just for a limited time only.