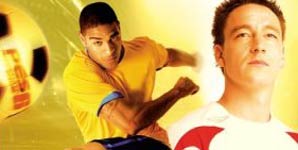 It makes me sigh wistfully when I think about the fact that I have been playing this game since 1994 that is twelve years in total. Originally the game was available exclusively on Nintendo consoles but it wasn't until ISS Pro Evolution was released, in 2000, on PSOne that the masses really took the game to heart. Many would argue that all earlier incarnations were not the same game but as an avid and early user I can assure you the soul of the game hasn't changed. Although, every other element has!

So, we now have Pro Evo 06 on a brand new console the Xbox 360. The main questions to be asked are; do Konami utilize the 360's meaty processing power, graphical superiority and HD capabilities and what does all this extra oomph mean to the game-play. Oh, and what's new in this years edition?

Features-wise there isn't a pile of new stuff on offer. Eight-player online support has been added, an increase in the number of licensed teams, and an international challenge mode. Beyond this you would have to call other changes "tweaks" as apposed to new features. The navigation is more fluid, a few more camera angles are available, the cut scenes have been updated vastly, replays are better and there's an odd bit of extra info here and there. Again, true to Konami form it is on the field of play that the real "evolution" has taken place.

What every football simulation player is looking for is on field realism. The closer the action is to what the player sees on a Saturday afternoon or on Match of the Day the better. On Pro Evolution 4 if you played the game for long enough you started to see the patterns, in version 05 the CPU was starting to play a mean game of football. In 06 the AI has gone through the roof!

Whether it the CPU opponent or your own team mates the off the ball movement is tons better, your team mates now make runs into space more intelligently, while the physical nature of the sport has also been enhanced with new turns and defensive blocks, alongside closing down unmarked opponents.

The shooting system has also been refined, and your players will be able to attempt more snap shots than in previous versions, while volleys and half-volleys have been reworked. It is now more important that you time your strikes right. It is now possible to retain control of the ball after performing a sliding tackle, while new feints and backwards dribbling are also possible. Passing is better but more difficult, you should definitely be facing the recipient when passing and the chances of playing a short or off target ball have increased.

Graphically Pro Evo 06 on Xbox 360 is hot! At a glance when playing a match using the "wide" camera angle you wouldn't notice any difference between 06 and an older version.
Although when you get closer with the camera you will see that huge advancements have been made in the player animations. Whilst the stadiums and cut scenes are all looking much sharper, shinier and more detailed, again, the lion's share of the graphical work has been ploughed into subtle tweaks and advancements in the on field play. When watching replays of your goals you can fully appreciate the animation advancements. It looks pretty god damn real!

Sound-wise Pro Evo 06 hasn't gone far at all. The commentary is still provided by Peter Brackley and Sir Trevor Brooking and is virtually identical to Pro Evo 05. The Konami house band have updated there Jap funk menu tunes but beyond that there isn't much to say.

Overall some people may not be able to justify the cost of a new game to have what essentially seem to be minor tweaks. Although I must stress if you are serious about your CPU football then what has been added to Pro Evo 06 will take you into the next dimension of on field action. Unlike it's long standing counterpart EA's Fifa there isn't really any whistles and bells to the Pro Evo package just serious football for serious football fans.