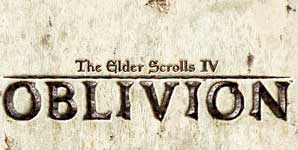 The Elder Scrolls series is now over ten years old. It has developed from an old skool 2D adventure game with blocky graphics and annoying music into the best looking role playing adventure game I have ever seen. The world which you inhabit is beautifully rendered in immense detail, the games characters are the most realistic to date, the voice acting is plentiful and brilliantly done and the control system and camera work are also a complete triumph. This is the first killer RPG on the Xbox 360.

Oblivion's predecessor Morrowind wasn't everyone's cup of tea; historically role-playing games have been an acquired taste. Oblivion, on the other hand, is so well constructed and so instinctive to control I think any game savvy player will find Oblivion to be a simple pick up and play experience.

The world in which your adventure takes place is seriously big, so big it is very easy to get lost. The main quest is a gripping yarn and will take you about 40 hours to world your way through but the lion's share of play in Oblivion is peripheral. You can get lost in the affairs of each and every individual town you visit, you can join and go on to lead various factions, become a cat burglar, do stir for your sins, catch a disease that leads to vampirism, buy your own house, invest in your favorite business and much more.

Firstly you need to choose a character. The amount of choice available is massive and you get to see the detailed faces of many of the in-game characters. Your journey starts with you incarcerated in some dungeon or other, you then get caught up in an attempt to escape. The escape party is led by the emperor and his most loyal guards. The emperor is voiced by Patrick Stewart of Star-Trek fame. The emperor recognizes you from his recurring dream and tells you that you are fated to serve him in his quest for a successor.

Now you need to get out of the sewers. This initial journey sees you getting handy with most of the games systems. You get to pick things up and mess around with your inventory, test out your fighting skills on some goblin guards, fire your bow and arrow, sneak up on guards and take them out ninja style plus lots more. This opening level serves as training but also sets the basis for the story and introduces the key characters all with great aplomb.

Fighting plays a large part in Oblivion. Weather you prefer stealthy combat or full on battling you can take each encounter what ever way you like. Opponent AI is very good and each and every creature you come across will react differently. Humanoid opponents will taunt you if they gain the upper hand as well as turning to run if they are getting hammered. Stealth is also a powerful weapon and you can choose to sneak up on an opponent, pick their pocket then slit their throat without making a sound.

Interaction is the key to success. In each and every conurbation you visit there are lots of characters to talk to. This is nothing new in the RPG world but how this has been executed in Oblivion is genius. Every character is unique, they move around their home towns like they have purpose. The characters have routines, they get up in the morning, go to work and night go to the pub then bed. There isn't always a lot to find out from each character, but the simple fact that there are so many different lifelike characters in this game is amazing. Each character feels like a real person, the facial expressions are superb and although there isn't always lots to discuss, this is how you will find out about quests, rumors, guilds and lots of other detail about the world.

Traveling around the world is far more, straight forward than in previous titles. You can travel on foot, you can steal a horse and ride that around the countryside or you can use your map to teleport from one area to the next using the "fast travel" function. Your interface clearly states what your next objective is and you also get help from your compass. This works by your next objective destination being highlighted on your compass meaning you can travel there easily. This is similar to the next objective highlighting on the map in GTA for instance.

Experience is gained all the time. Every time you jump further than you have before your acrobatic skill increases. This system is used for all development throughout the game and is simple but affective.

Graphically Oblivion is amazing. On the Xbox 360 the frame rate is strong and never drops, no matter how many characters are on the screen at once. The world that has been created is one of beauty, each blade of grass moves individually, the wind rustles through the trees and the tress sway in said breeze. The characters are something-else, each has been created with lots of individuality and charisma.

Sound-wise this game is perfection. Featuring its own classical score which swells out of the ambience when the fighting kicks in, sonically Oblivion is a classy affair. The character acting is staggering, the shear amount of perfectly acted conversation in the game is unbelievable, I think this is what makes the game so immersive and believable. The acting roster features the likes of Sean Bean and Patrick Stewart and this quality only leads to the line between a film and a game blurring even further.

Overall Oblivion: The Elder Scrolls is a new standard in RPG adventure gaming. Previously this genre has been not to every body's taste. Oblivion takes away all the turn based static elements of this genre and replaces them with compelling action, a deep and rich story line, excellent characterization and some mental graphics. Buy this one, its worth it.