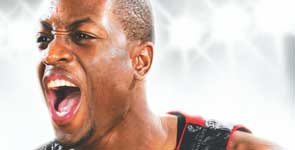 Apparently built from the ground up NBA Live 06 should be a true representation of next generation gaming. Even the game engine itself has been built from scratch, or should that be rebuilt? Unfortunately NBA Live 06 doesn't perform as well as I would have liked, but you will be able to see from the screenshots that this game looks stunning, in still images anyway.

The gameplay is very similar to other NBA Live titles so anyone familiar with previous games will feel right at home here. Don't expect a copy of NBA 06 on other platforms though, as this game's more like the 05 system, all the freestyle superstar features have been removed. You have the separate buttons for dunk and shoot along with a load of other moves. Then you have your freestyle stick to move the ball around and do Harlem Globtrotter type moves. The computer team of AI Players seem to have more intelligence than previously. They will spread themselves around the court and try to find open positions while the defenders seem to be much harder to beat mid dribble. The AI players on your team seem to be quite slow, especially in defence when dealing with an attack or rotating on the spot. The free throw system isn't up to par, not even close in fact. To make a shot you do the same move that is seen in Tiger Woods, pull back on the analogue stick and then push forward in one smooth motion. The problem is the system seems completely random a perfect shot in your eyes can bounce off the rim for no apparent reason at all. It's so bad that you can use a crap tactic to help yourself win a game. If your opponent tries to dunk, simply foul him. He will more than likely miss the free shot and then you can take control of the ball.

Graphically NBA Live 06 looks pretty stunning, the players are very well made, especially the faces, unlike FIFA 06. The skin textures are great also, they do have a bit of that plastic sheen but they are definitely an improvement over the FIFA players. As you play NBA Live 06 you will notice the animation looks very smooth and fluid as the players dribble, juke and dunk. However, there are no decent animations to join any of the other animations together. In other word animations don't blend together and it's really noticeable. Again this game suffers from a drop in frame rate, especially in HDTV mode. In fact 80% of EA games I have played on Xbox 360 have the same problem. It's not something I ever expected to see on a 360 when it arrived. It makes me think the 360 isn't anywhere near as powerful as Microsoft have suggested or EA have rushed their games without cleaning up the code in order to get the on them shelves in time for the 360 release. If you don't run Xbox 360 games in HDTV mode you will never see what the Xbox 360 is capable of, which is a shame as the difference is incredible.

If your looking to buy NBA Live 06 you need to know this, the 360 version is basically NBA Live 05 with a new look. The gameplay hasn't changed much so owners of the previous games will find things very familiar. Owners of Live 06 on other platforms should expect a step back in terms of gameplay as some of the 06 features have been lost in the Xbox 360 translation. While the screenshots will look fantastic, the game doesn't look as impressive in motion due to the badly joined animations and the frame rate issues. If you are desperate for a basketball title for your Xbox 360 go ahead and buy it, otherwise be patient and wait for the next installation of NBA Live and hopefully it will be greatly improved or maybe 2K Sports will pull one out of the bag with NBA 2K6.