Kameo Elements of Power is the first adventure game on the new 360 console. Developed by Rare this game has been in the making for what seems an eternity. Boot up the 360 with Kameo slotted in the drive and you are given a quick pre ramble of the story up to now. Kameo, a princess with wings, much like a fairly in fact, has been given the power to transform into various unusual creatures. When Kameo's sister hears of this jealousy ensues so she decides to teach Kameo and the rest of the family a lesson. She befriends the troll king and kidnaps her own family and threatens the enchanted kingdom. So with her new powers Kameo sets off to put all the wrongs right and sort out her wicked sister. 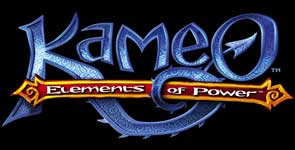 The opening level gives you an introduction to the games amazing graphics, which are even more special on an HDTV. From the start you will have the ability to change into three different creatures a yeti, a plant sporting a pair of boxing gloves and an armadillo type rhino thing. Each character is controlled in the same way. Special moves are controlled by the shoulder buttons. There are three combinations, the left, the right or both buttons pressed at once will initiate an attack. While each character controls in a similar way their abilities are quite different. For example the plant character creeper can punch with its left and right arms, when you use the two special move buttons together the plant will shift underground just showing a couple of leaves on the surface. This ability can be used to crawl under small gates which the other creatures would be unable to do. The armadillo rhino creature is able to curl up into a ball and launch itself into enemies or up ramps, very similar to sonic the hedgehog, but sonic doesn't skewer his enemies on huge protruding spines on his back. This is basically the core of the game; use your creatures to their best effect to solve puzzles and deal with trolls and other nasty creatures along the way.

A nice touch to Kameo is all the help scrolls littered around the levels to help you on your way. These will basically tell you how to deal with awkward baddies or how to get past what might seem an impassable room or area. If you don't want any help that's entirely down to you, just don't pick up the scrolls as you go. What is strange though is the instructions after the castle level, everything seems to go back to basics, but the fact is you know how to move around and control various other aspects as you have found your way outside of the castle and killed a good number of trolls along the way. It seems as though the castle level may have been bolted on late on in the development process as the enchanted kingdom level may have been on the bland side as the enchanted kingdom is a danger free zone. You can explore and look for some secrets which are hidden off the beaten path and you probably will as you don't have a very good idea as to where you are meant to be going. But things improve when you get to the other levels where the trolls are making full on attacks and the elf's (the elf's are allied with Kameo btw) are trying their best to fend off the attack and protect the enchanted kingdom.

As you progress through the game you will be able to pick up additional creature morphing powers by defeating shadow trolls which hold the additional creature forms hostage. Each shadow troll battle is pretty much the same as the first but with each one the difficulty increases. The anticipation of getting a new creature form does manage to cure the repetitive boredom of these very samey fights.
As mentioned before - the puzzle aspect of the game comes from using different creatures to solve problems. These problems come in different forms, such as fighting enemies in the most effective way or getting to hard to reach areas, which means you won't have to do repetitive tasks such as move blocks around or go and fetch important objects from the beginning of the level. The best thing about this is the subtlety of each element which blends perfectly into the game.

Kameo features some great action too; in fact you get a taste of things to come in the first level. Again it's about picking the right character to deal with each enemy. You will face some enemies which can't be beaten. The first case of this are trolls which roll around in metal spheres. Your armadillo type rhino character will deal with these guys by knocking them off the edge of the platform into fierce fires below.

Unfortunately the adventures don't last long enough, after a good 10 hours or so the game is complete and you will be left feeling a little cheated. There are many creatures that you will win that don't get used to their full ability so a couple of more levels would have been nice to make the most of these creatures.

However there is a two player co-op mode which utilises split screen. This is somewhat of a let down though. You are simply put into one of the games action sequences. The problem is these levels are blatantly designed for the one player game as there are no co-op style challenges. If nothing else the co-op mode lets two people play the game at the same time, good if you have a couple of kids who fight over the controller.

One of the standout features of the game has to be the visuals. The only really uninspiring character is Kameo in her own form, she looks like any other number of fairy style characters from games of the past. The other characters are all really imaginative and weird. The environments are more predictable but you can tell a lot of care has gone into the look and feel of the surroundings. It all looks great and unlike virtually all the other 360 titles I have played Kameo doesn't have that kind of plastic looking sheen on everything.

Overall the gameplay in Kameo is very well balanced. The correct use of each character or creature form is the name of the game and what makes things better is the way it's so subtly worked into the problem solving. With no fetch missions it makes a really refreshing change to what has become the norm, maybe with the exception of ratchet and clank series on PS2. The main problem with Kameo Elements of Power is the length of the single player game. Considering it has taken Rare so long to come up with the goods you would have thought they may have a little more to show for it or at least a decent co-op mode. Kameo is still a great game and one of the only 360 games that will appeal to the whole family rather than a select few. It's a great addition to the Xbox 360 line up and it's a game you really shouldn't be without if you are one of the lucky few to own one.