Set in an incredibly detailed tropical island nation spanning over 250,000 acres of diverse landscapes, Just Cause is a massive, free-roaming action game set in a rogue South American state suspected of stockpiling Weapons of Mass Destruction. Amidst bustling cityscapes, sandy beaches and sweeping mountain ranges, you play Rico Rodriguez, a Latin field operative and specialist in regime change who is tasked with overthrowing the corrupt government by a top secret US agency. 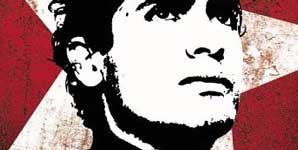 Featuring intense air, land and sea stunts, Just Cause brings you never before seen extremes allowing you to do crazy stunts like pulling a parachute while traveling at top speed on your motorcycle, jumping from planes to helicopters to boats, or driving off a cliff just to set yourself up for a stylish freefall. With 89 air, sea and land vehicles at your disposal, you have the freedom to free roam and explore the massive world of San Esperito or tackle your assignments however you want.


Just Cause offers the freedom to tackle your assignments however you want: playing the island's factions against one another, inciting a rebellion among the masses and building alliances with rebel forces and drug cartels. The action takes place in an incredibly detailed game world which consists of over 1,024sq kilometres of mountains, jungles, beaches, cities and villages. The island can be explored by land, sea and air, as you will have at your disposal one of the most varied and exciting array of vehicles ever seen in a video game.

Primary Features:
Revolution, defeat corruption, fights for justice and lead a nation to freedom in an open ended world where everything is possible!

The largest environment ever seen in a game! Over 1,024sq kilometres of land, sea and air, allowing complete gameplay freedom.)

Over the top stunts! Jump from vehicle to vehicle, skydive, base jump, parasail.

Secondary Features:
Your playground - 1,024 sq kilometres of mountains, jungles, beaches, cities and villages to explore, quire possibly the largest environment ever seen in the gaming world
)
Freeform gameplay - approach missions in any way you like, or break off from the fight and enjoy exploring the islands landscape.

Massive selection of vehicles - over 100 of the most varied, exciting array of land, sea and air vehicles ever seen in a video game.

Wealth of missions - story missions, side-missions, bonus missions and many more all ensure there is plenty of action spread throughout the islands.

Province Control - change the balance of power in the game world by building alliances with the local guerrillas and drug cartel.

Just Cause is a cross between Goldeneye and Far Cry with a bit of GTA San Andreas thrown in for good measure. You could say that Eidos have taken the best elements of the afore mentioned titles and blended them together to create their own scenario, so no points for scenario originality. Where this game does score points for originality is in the crazy camera work, explosive action and also the games breakneck pace.

The filmic quality helps to immerse you in the world of this mysterious island, which is vast by the way, and as the story unfolds you can be sure that you are in for the ride of your life.