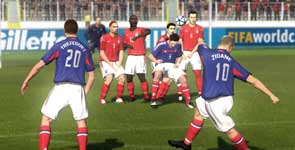 FIFA 06 was originally released on the Xbox which was the best EA football title to date, then for the release of the 360 EA present FIFA 06 Road to FIFA World Cup. Unfortunately something has gone hideously wrong with Road to FIFA World Cup, in just about every way the world cup version is inferior.

As this is the world cup licensed game you will only have a choice to play one of the seventy odd international teams available. No club football here. There have been a good number of lesser teams that have been omitted but you're not likely to miss any of them. The qualification system is the same as the real world version, each team in placed in a group of six other teams and every team must play the rest of the teams home and away.

If you don't want to go down the world cup route you have the choice of playing fictional tournaments, friendly matches or online games via XBox Live. The friendly matches are great for when your mates pop around for a quick kick about and a couple of beers. When you fancy playing human players at any other time you will have to go online. Generally the online mode is fairly good, there is an element of lag but it's fairly minimal and it shouldn't effect the match. A good feature which should be used in more games is a system that reduces your rank should you disconnect from a game. This works well as people who are loosing rarely quite the game half way through due to the rank penalties imposed.


The true strength of a football game in my opinion is decided by performance on the pitch. First thing you will notice are the visuals which look fairly impressive at first look, stadiums look nice, crowds look pretty good and the players seem very easily recognisable. It isn't until you take a second look that everything looks kind of fake. The players look like they've had a huge amount of plastic surgery and then been smeared in Vaseline. There is a similar problem with the crowd, when the camera zooms the crowd is unrecognisable and incredibly pixelated. There are some other problems too the camera can get stuck behind the advertising boards at times, which obviously causes some pretty major problems with the game play.

Apart from the camera malfunctions none of the problems above are enough to ruin a game. When you start to take control of the game nothing seems to gel particularly well, everything is made difficult, even passing can be problematic at times due to strange behaviour of the ball. Players are less than intelligent, more like programmed robots that follow a set of instructions to the tee, but don't appear to think. After making an attack and loosing the ball to the opposition your players will run for the hills, no attempt is made to win the ball again. In fact your own players seem to have an inability to tackle. There is an awkward bodge that can improve the game. If you keep switching your team's strategy from defence to attack your players don't seem quite so keen to run back down field after loosing the ball up field. But this isn't really a sensible option.

Probably the best aspect of the game is the commentary by Sky Sports residents Andy Gray and Martin Tyler. They describe all the action well but they do appear to have their own favourite players which they tend to praise a few two many times. When the game is fairly dull the commentators start to ramble on about random facts and trivia which is a really nice touch, when you first start playing Road to FIFA World Cup, and it can break up some of the monotony. After playing the game for a while the trivia seems to get pretty repetitive and monotonous in itself.

FIFA 06 Road to FIFA World Cup is definitely a disappointment and probably one of the worst games available on the XBox 360 and the fact it's even inferior to the FIFA 06 games on PS2 and the XBox is unbelievable considering this is a game on a next generation console. Although there are no other football games available on the 360 at the moment, it's still very difficult to recommend a purchase. If you really want the new FIFA game go and buy it for your original XBox or PS2.