From one important seaport to another, Wye Oak came across the pond from Baltimore to Dover as they played at The Booking Hall. From the home of the Star Spangled Banner to the home of Banksy's Brexit mural and, so they were told, "the best castle in the world", Wye Oak traversed the three-thousand seven-hundred miles across the North Atlantic to play to a very intimate crowd at a venue in the shadow of a flyover nestled between the docks and the railway. 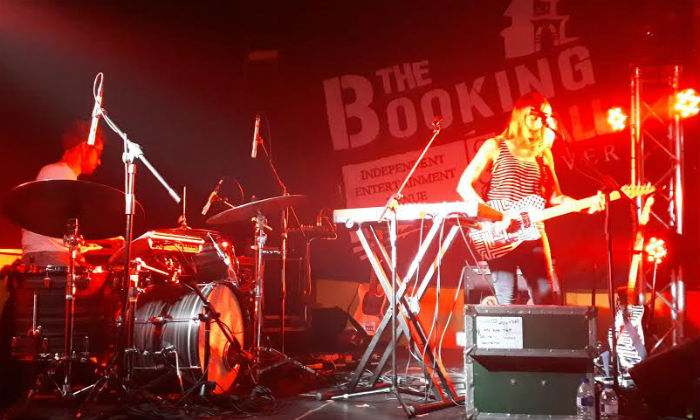 Buoyed by the success of their latest album 'The Louder I Call, The Faster It Runs', it was fortuitous to catch the Marylanders so up close and personal in such a small capacity venue. The duo of Jenn Wasner and Andy Stack were also joined on stage for a large proportion of the gig by an additional bassist as Jenn played guitar and sang vocals whilst Andy delivered some wonderful percussive wizardry and deft keyboards.

Supporting Wye Oak was soloist Oaklander and former baker Madeline Kenney. Kenney delivered a quick set of numbers with nimble dexterity as she looped vocals and guitars in varying ways to concoct a much bigger sound than expected from her solo self. Her set was made up of her own material until the final track: a cover of Cass McCombs 'Medusa's Outhouse' (not exactly an obvious choice for a cover but a previous release and good nonetheless). Madeline's mastery of the pedals was a lesson in itself but it was her vocal that defined her performance. "I'm usually funny back home", she quipped after thanking everyone for being there, "It's pretty cool... I saw a castle". 'Signals' was her set highlight, built around revolving rhythms and a luscious layered vocal.

Wye Oak weren't too long in taking to the Booking Hall stage after Madeline. With a stripy top and geometrically patterned guitars, Jenn was looking weirdly like she'd been lifted off an Escher print, although there was also passing comment as we left that "she looked like Carol from the office!"

The trio opened up with the gentle and harmonic notes of 'Lifer' followed by arguably their biggest song off of their latest album 'It Was Not Natural'. The high vocal, rumbling bass, piquant percussion and electro keyboard flourishes signalled a strong beginning. The band followed, after a false start because "one of your eight hundred cords didn't get plugged in" as Jenn suggested to Andy, with another big hitter in the shape of 2017's deeply rhythmic 'Spiral'. The track was a set highlight, starting and continuing with a looping and undulating arrangement that eventually broke into a fully blown epic.

Jenn and Andy appreciated everyone that had made the effort to attend and thanked the Booking Hall for everything they were doing there but you also got the impression that in-between the asides about trips to the local Nando's and their very much looking forward to visiting Dover Castle on their day off, that they were a little underwhelmed with the turnout and this was reflected in a rather, at the very least, workman-like and lacklustre performance from Jenn who just seemed at times to be going through the motions.

There were harder, more driven delights in the form of 2011's 'Holy, Holy' from their album 'Civilian' and a couple of tracks later on where just the duo remained on stage as Jenn took up bass duty. Both sounded great, only serving to question the need of the third party altogether. 'Before', from the band's 'Sheik' album, amongst others in the set, showcased Andy's undoubted ability and prowess on the drums as well as his expertise at juggling the beat and the keys simultaneously.

Their final track of the night, rounding off a succinct set with no encore, was to be the title track of their album 'The Louder I Call, The Faster It Runs'. The slowly building track was one of the best of the night as all the elements aligned to produce a triumphant conclusion. Jenn's vocal mix was also the best of the night, Andy continued to excel in his dual role and bassist W.J. Hackney finally enhanced the duo's live performance.

Wye Oak came a long way to entertain and did so with varying degrees of success. The set was characterised by the amazing and the mildly disappointing. Andy's proficiency on the drums and keys was amazing but Jenn's vocal clarity was at times lost in the overall live sound. The songs that worked, worked well, and it was a good night but it was one that delivered on the remit rather than one that blew you away.