Reviewing a World's End Girlfriend album is not an enviable task; much of his work is hard enough to comprehend, never mind analyse. 'Seven Idiots' is the first full-length on Virgin Babylon Records, a new label formed by Worlds End Girlfriend, or Katsuhiko Maeda as he is known to his friends, to put out releases of his own and that of his friends, and it is even more schizophrenic and uncompromising than the cream of his extensive back-catalogue. Fortunately, it is also the most joyous, the most exciting and, most importantly of all, the best. 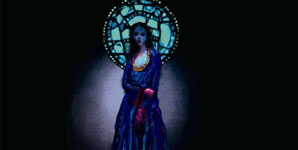 For whilst there is undoubtedly the odd moment of frustration and near-enough nonsense there are countless more moments of genius. 'Les Enfants du Paradis', 'TEENAGE ZIGGY?' and 'ULYSSES GLAZER' are built on an irresistible mix of deeply overdriven guitar riffs, glitchy electronic beats and twinkling pianos and strings that may loosely bring to mind The Mars Volta, The Mahavishnu Orchestra or the soundtrack to Final Fantasy 8 but are completely unique, at all times remarkably complex and remarkably rhythmic; all interlocking grooves that stretch out endlessly, handclaps and ricochets of 4/4 drumsbeats

It may not be typical club fare but the first half of 'Seven Idiots' has a delirious, ever-building vibe to it, sprawling out and swallowing childish things like 'genres' and 'styles' as it reaches zenith after zenith. The album takes a left turn at 'Bohemian Purgatory', with songs becoming more chaotic and, in the case of the eardrum-terrorising clusterfuck 'The Offering Inferno', sometimes losing any sense of logic or sanity. Yet for the most part the right notes are hit, a testament to Maeda's mad genius, and there is so much beauty buried underneath the synapse-splitting percussion that it is more than worth the several spins it takes to discover it.

Those more familiar with Maeda's more recent work, 'Hurtbreak Wonderland' and the Mono-collaboration 'Palmless Prayer', and left bewildered by the preceding dozen tracks may find solace in the haunting closer 'unfinished finale shed?', built on a stark, spiralling piano line. Until 'Seven Idiots' it would have come close to typifying the Tokyo native; a soaring melody wrought with beauty and nervous energy, threatening to explode but never when you'd expect it to before dying apologetically under a squall of synths.

Now however it is merely an epilogue to a complete reinvention, a slow heartbeat fading out before the scattered pulse reawakens. Where Katsuhiko will go from here is a question he himself would probably be unable to answer, but with 'Seven Idiots' he has created, at least until his next release, a defining statement and a full-length that has more than realised his potential to be one of the most unique and vital solo artists in modern music.