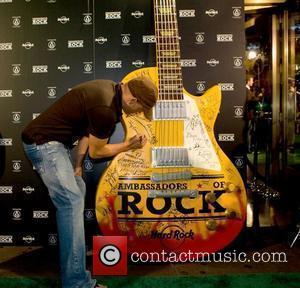 Picture: Woody Harrelson signing the oversized guitar on the green carpet at the 'Hard Rock's 2007 Ambassadors of Rock Tour' and official launch of the...

Woody Harrelson is to play gay as an ageing bisexual escort in what is being touted as the follow-up to cult 1980 film AMERICAN GIGOLO. The former CHEERS star will pick up where Richard Gere's seedy character left off, playing an escort of Washington DC socialites with a gay lover waiting for him at home. Writer/director Paul Shrader admits THE WALKER is a continuation of American Gigolo. He says, "His gifts are now more social than sexual." Shrader accepts the choice of Harrelson may be a surprise to some: "This will be quite a transformation for him, from the hairpiece and his manner to the clothes he wears." The film, which starts shooting in Britain next week (beg27MAR06), also features Willem Dafoe, Lily Tomlin, Kristin Scott Thomas and Lauren Bacall.