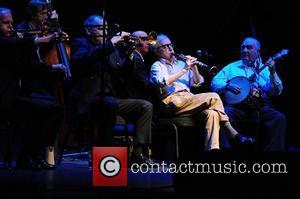 Woody Allen continued his trend of shunning awards ceremonies at the Oscars on Sunday (February 26, 2012), despite picking up the gong for Best Original Screenplay for romantic-comedy 'Midnight in Paris''.
The quirky movie - starring Owen Wilson as a writer who goes back in time to meet the likes of Ernest Hemmingway and F. Scott Fitzgerald - beat The Artist to the screenwriting award, though Allen was not in Los Angeles to receive his award. Through the decades, the legendary filmmaker has consistently shunned awards ceremonies, and even skipped the Oscar nominee's luncheon earlier this month. He also failed to attend the Golden Globes, where he won Best Screenplay. Back in 1974, when his hit film 'Sleeper' was ignored by the Academy, Woody was quoted by ABC News as saying, "The whole concept of awards is silly. I cannot abide by the judgment of other people, because if you accept it when they say you deserve an award, then you have to accept it when they say you don't".
Earlier this week, it was reported that Midnight in Paris was the "People's choice" to win Best Picture at the 84th Annual Academy Awards, based on favorable mentions of the film on Micro-blogging site Twitter.