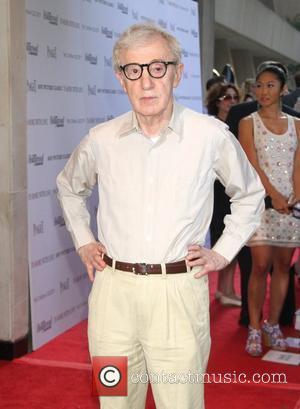 Picture: Woody Allen The Cinema Society With The Hollywood Reporter & Piaget and Disaronno screening of 'To Rome With Love at the Paris Theatre - Arrivals...

Moviemaker Woody Allen dreads raising two teenagers at the same time as he is convinced his kids will become "terrible" in their adolescent years.
The Midnight in Paris writer/director and his wife Soon-Yi Previn have two adopted daughters, Bechet and Manzie - who are aged 12 and 13, and Allen admits he's uneasy about the years ahead.
He tells Reuters, "It's almost as if someone gives them a licence to say, 'I'm a teenager now, I can become terrible.' And they become terrible. They'll come back eventually, but they won't come back for years. And you can't fathom that those little kids who were so dependent on you - and you were having so much fun with - they're going to be terrible. Or that you're going to be an embarrassment for them. They won't want you to come to school to get them. They won't want you in the room with their friends."
Allen also refuses to screen his own films for his daughters, insisting, "The less I make it a show business family, the better."
He adds, "I should be a regular father. I don't want them to think of me as their dad the celebrity. And they don't. They think I'm a loser. They've said it in no uncertain terms. 'Oh dad, you're such a loser!' I feel better about that than if they go to school and say, 'Oh, dad's picture grossed $12 million the first weekend.'"