Woodpigeon's 'Featherstone' is a very rare track from vinyl-only album 'Balladeer/To All The Guys I've Loved Before', released on Boompa Records in September 2010.

Woodpigeon's first album, 'Songbook', was released in 2006 in the USA and Canada and 2008 in the UK. Their second album, 'Treasure Library Canada', came out in February 2009 and their third album, 'Die Stadt Muzikanten', was released in January 2010 and was accompanied by the EP 'Balladeer/to all the guys i've loved before'.

Over the years, Woodpigeon have toured Europe and North America with artists such as: Withered Hand, Jose Gonzalez, Iron & Wine, Grizzly Bear, Broken Social Scene, and Calexico. Woodpigeon have also performed at a number of festivals, including: Sled Island, The End of the Road, Haldern Pop, Field Day and Pop Montreal and have gained support from various radio stations: BBC, CBC Radio, Le Blogotheque, XFM and Radio France, to name but a few. 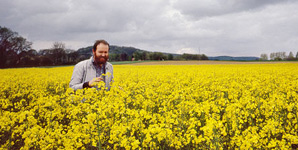