Review of Women live at The Deaf Institute, Manchester on 2/09/2010

You'd be forgiven for thinking the key to blog attention is terrible sounding material. After all, it got Sleigh Bells a tour supporting MIA, and Wavves a lucrative Mountain Dew sponsorship. But with the latter ditching the lo-fi for a hook-heavy pop (in Wavves' case with the release of recent third effort King of the Beach), DIY's nostalgic return to cassette-quality could be over before it began. 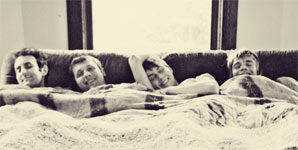 In ditching the overpowering clouds of reverb and tape hiss that muffled their self-titled debut, Calgary four-piece Women have embraced the pop prowess that had earlier seemed little more than untapped potential. On tonight's evidence, that bristling Spectoresque pop sheen is just one aspect of a performance that swings from Pere Ubu to Wolf Parade (Heat Distraction), via the jagged Witch Trials-era Fall of closer Drag Open.

What sets 2k10 Women apart from their earlier selves is their ability (or confidence) to strip themselves down to the bare minimum. In between Patrick Flegel's frantic swipes at his fretboard and his brother Matthew's jagged bass stabs, tracks regularly drop to just one chiming guitar line, or a thumping bass/drums combination. Eyesore in particular stops dead midway, only to build up again through a soaring Interpol-esque ring. It's this track, pounding and sighing through a sweltering Deaf Institute, that stands as the set's high point; a jangly take on Beach House's Walk In The Park.

Black Rice sees the band take on another member; support act Idiot Glee, aka James Friley, kneels behind a xylophone to bash out accompaniments to the track's saccharine middle-eight. It's a gorgeous moment but gets lost somewhat, with the band themselves collectively in noodle-mode, and a singular lapse into the dense layers that, on record, could threaten to spoil the moment. Yet live, it twinkles sharply enough to stun, a lesson in restrained anthemics. A different band on record to live, perhaps. Each better in their own ways.