The 26 year-old rapper shared several photos of himself incarcerated on social media, after he was arrested for possessing marijuana on Sunday (May 25th). 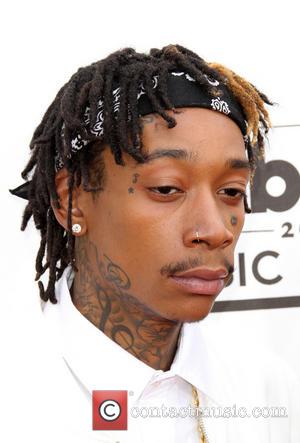 Wiz Khalifa is known for his love for smoking marijuana, and this doesn't change when his hobby even lands him behind bars.

The rap star was arrested on Sunday (May 25th) after the Transportation Security Agency found a "green leafy substance" while he was trying to fly from El Paso to Dallas, Us Weekly reports.

"The TSA Officer learned that Thomaz did not have any identification which led to him being sent for secondary screening," El Paso Chief of Police Gregory K. Allen also said in a statement. "During that screening the TSA Officer located a metal container inside of the backpack which contained a prohibited item."

The 26 year-old was charged with possession of marijuana (a misdemeanor) and had his bond set at $300, which was posted several hours later for his release.

But being put in handcuffs and taken to the local police station didn't affect Khalifa as much as you would think.

Since he had some unexpected spare time on his hands, the 'Black and Yellow' rapper decided to take a photograph of his cell door and share it on Twitter.

Several minutes later, Khalifa took a selfie in the cell of himself sat down next to the door, with the caption "Jail selfie."

It is quite astonishing as to why the husband of Amber Rose was allowed to take his cell phone into jail, but he didn't ponder over this too much as he was more concerned with keeping his 14 million followers updated.

The most irritating aspect of the whole ordeal for the rapper was the fact that he couldn't drop his new mixtape, ironically called "28 Grams."

MORE: Wiz Khalifa smokes a lot of weed before shows

He has since released the new tape.