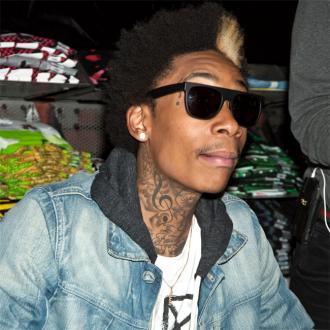 The 26-year-old rapper thought the blonde beauty's set at the 56th annual ceremony on Sunday (26.01.14) in Los Angeles was so boring he couldn't keep his eyes open.

Questioned by Joan Rivers on 'The Fashion Police', she asked: ''I loved that you had the good watch on [at the Grammy's], which is the detail. How many times did you check that watch during Taylor Swift's endless ballad?''

Wiz responded: ''I love Taylor, but I'm not even gonna lie. I fell asleep. Just a little bit...then I woke back up.''

The 26-year-old star was on the E! show with his wife, model Amber Rose, who interjected: ''We love Taylor.''

Taylor took to the stage to perform the weepy piano ballad 'All Too Well' from her hit album 'Red' at the Staples Center.

The 24-year-old star is rumoured to have written the song about her ex-boyfriend, actor Jake Gyllenhaal.

The pop beauty stunned the crowd with some fierce head-banging during the heartfelt performance.

Wiz was nominated for Best Rap/Sung Collaboration for his track 'Remember You', which also features The Weeknd, but the star - real name Cameron Jibril Thomaz - was beaten to the top spot by Jay Z with Justin Timberlake for 'Holy Grail'.