The most jaw-dropping musical instrument ever created.

Literally every comment you've ever made about a 'musical genius' will thus forth be rendered void, because there is only one true genius out there and it's just been revealed to be Martin Molin of Swedish band Wintergatan, who has tirelessly crafted the most incredible musical instrument you have ever and probably will ever see in your life. 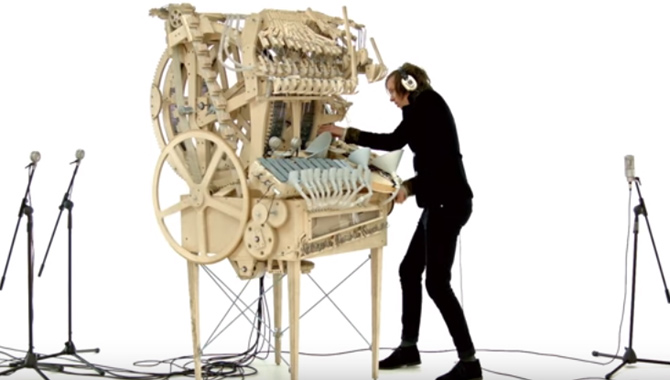 Martin Molin is making musical innovations with his Marble Machine

Prepare for your jaw to hit the floor, repeatedly, with this new video taking the music world by storm. It features Martin Molin of the Swedish electronic band Wintergatan performing a song using a unqiue wooden machine that's a cross between a piano, a synthesizer, a glockenspiel, a guitar and a drum kit. Inventor Molin has dubbed it the Wintergatan Marble Machine, on account of it being operated using 2000 marbles.

The Marble Machine took 14 months to build, with Molin joined in his project by Gotherberg artist Marcus Dimbodius who helped with the design aspect. 'It is thanks to him that the cymbal is built into the box and that we don't have to ever see that cymbal solution that you can see in the video ever again', Molin revealed on the Wintergatan Facebook page. 'He is also responsible for the fact that the marbles run on a conveyer belt which adds greatly to the Machine.'

The video was filmed and edited by Hannes Knutsson, with the costume designed by Angelique Nagtegaal, and it details the finer aspects of the Machine in sensational clarity. Molin starts to wind the Machine using a lever which sets the marbles in motion through the cogs, pulleys and funnels, before hitting a switch that sets off the glockenspiel. There are drum switches labelled Snare, Kick, Bass and HiHat wired to the drum machine at the back, and a bass guitar built into the structure, as well as a Brakedown lever which allows Molin to pause the action for a minimalist break which looks a little more complicated to operate. The basis of the machine takes inspiration from classic music boxes with a wheel dotted with with nodules that form the main composition.

Marble machines aren't actually a new thing either, but this new creation is innovative in its engineering. 'Marble machines always make music, but I was thinking maybe I can make a programmable marble machine, that doesn't make chaos but is actually controllable in the sounds it makes', Molin told Wired. 'It's all about the grid. I grew up making music on Midi, and everyone makes music on a grid nowadays, on computers. Even before digital they made fantastic, programmable music instruments. In bell towers and church towers that play a melody they always have a programming wheel exactly like the one that is on the marble machine.'

Molin's project isn't stopping here either as he plans to expand his idea into smaller recreations.