Wilmer Valderrama says he is looking forward to proposing to Demi Lovato in the future, but insists they aren't engaged yet.

Wilmer Valderrama is looking forward to proposing to Demi Lovato.

The 35-year-old actor, who has been dating the 'Heart Attack' singer for four years, insists they aren't engaged yet, but hinted he is planning to ask the 22-year-old singer to be his wife in the future.

Asked about the ring on his left hand, he told E! News: ''We're not engaged. But you know it's something that I definitely look forward to in the future. We'll see. You know, who knows?''

Rumours began swirling that the couple were planning to tie the knot after Demi posted a picture of herself wearing a ring on her engagement finger earlier this month.

After years of trying to keep their relationship under the radar, the couple have been much more open over the past few months and the brunette beauty recently admitted she feels like ''the luckiest girl in the world'' to be dating the former 'That 70s Show' star.

The singer, who sought treatment in rehab for drug use, an eating disorder and self-harming disorder in 2010, also credited him for encouraging her to seek help again last year after he noticed she was showing signs of a partial relapse.

She said: ''I almost went back to rehab for my eating disorder last summer. I was obsessing over food and terrified of it at the same time. Wilmer noticed and called me out on it, which was a relief.'' 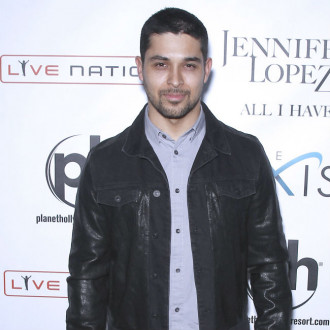