The snapshot, that was posted on Arias' social media accounts, shows the 13 year-old star lying on a bed with the shirtless 20 year-old actor. 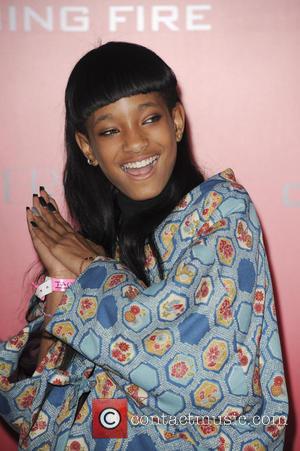 Willow Smith, the 13 year-old daughter of Will Smith, is at the centre of a controversial debate.

The young star was recently photographed lying in bed with 20 year-old actor Moises Arias, who was shirtless.

The snapshot was posted on the former 'Hannah Montana' actor's Tumbler and Instagram page on Tuesday (May 6th), but it has since been deleted on the latter.

Although neither Willow nor Moises were physically touching each other, the photograph has already started causing speculation over the nature of their relationship.

No word from either individual has commented on these rumors, but since there is a seven-year age gap between the pair, it will be undoubtedly seen as highly inappropriate if they are romantically linked.

It is clear from Moises' Tumblr pictures that he is close to Willow and her brother Jaden, as well as Kendall and Kyle Jenner, as they are all photographed hanging out together at recent events like Coachella.

Acting mature for her age seems to be something Willow is used to, the teen singer caused a stir when her song from last year, 'Summer Fling,' seemed to contain an exceedingly amount of adult themes, especially since she recorded the track at aged 12.

But her father, Will, isn't concerned about the photograph, according to TMZ. The gossip site reports, sources close to the Smith family reveal Will and her mother, Jada, believe their daughter is "very mature" for her age and old enough to make her own decisions.

MORE: Will Smith: "I Treat My Kids Like Adults"

In fact, the famous parents believe the photo is innocent fun, and an expression of art. Will & Jada are not concerned by the photograph