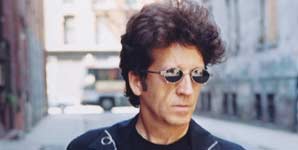 First album in six years, due on February 21, features Jakob Dylan and Rami Jaffee of the Wallflowers

New York, N.Y. Ã¢Â€Â“ Willie Nile has completed Streets of New York, his first album since 1999's acclaimed Beautiful Wreck of the World. In what U2's Bono has called "a great album . . . the songs all stand on their own," Nile has crafted what many feel is the best album of his career. The album is set for a February 21 street date, launching the new Brooklyn-based 00:02:59 label.

Praise for Nile's new effort comes from a number of legendary artists. Lou Reed, for instance, calls Streets of New York "a great album." Lucinda Williams comments: "Willie Nile is a great artist. If there was any justice in this world, I'd be opening up for him instead of him for me." And Little Steven adds: "Willie Nile is so good I can't believe he's not from New Jersey!"

In making Streets of New York, Nile turned to some friends for help. Jakob Dylan and Rami Jaffee of the Wallflowers appear on the songs "The Day I Saw Bo Diddley in Washington Square" and "Game of Fools." Larry Campbell, formerly of Bob Dylan's band, played on various songs. The band heard on every track on the album features Andy York (John Mellencamp, Mary Lee's Corvette), Brad Albetta (Rufus and Martha Wainwright) and Rich Pagano (Fab Faux, Rosanne Cash).

The album contains 13 original tracks plus a cover of The Clash's version of Eddy Grant's "Police on My Back." The song "Cell Phones Ringing (in the Pockets of the Dead)" was written in honor of the victims of the Madrid train bombings, though there always seems to be new tragedy for which it's appropriate.

In the 1980s, Nile released two critically acclaimed albums -- Willie Nile and Golden Down -- and toured successfully with The Who across the U.S. at the personal request of the band.

Willie Nile will tour late winter and into spring of 2006, including a probable stop at SXSW.