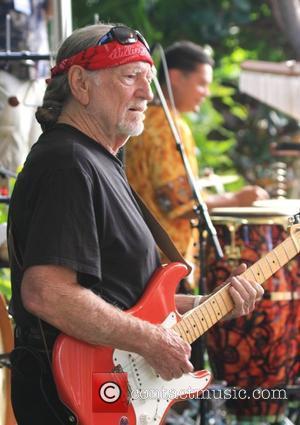 Willie Nelson was joined by an all-star band for a performance of his newest fan-favourite track 'Roll Me Up' at the Cmt Music Awards on Wednesday evening (June 6, 2012). The country veteran took to the stage at the Bridgestone Arena in Nashville with Toby Keith, the Zac Brown Band, Darius Rucker and Jamey Johnson.
The song is an infectious track from Nelson's latest album 'Heroes', reportedly about his penchant for smoking marijuana, reports the Associated Press. Lyrics include "So don't sit around and cry, Just roll me up and smoke me when I die". Darius Rucker says he fell in love with the song upon hearing it, saying, "It's so Willie.It's just get up there, play it live and have people dance along to it. It's really what Willie does best. His voice sounds so cool on it. It's just one of those Willie songs that's just undeniable". Some critics suggest that 'Roll Me Up' will become as ingrained in America's collective memory as Nelson's classic 'On the Road Again', though when asked how he continues to write catchy anthems, the country star said, "If I knew the answer to that I'd be a trillionaire.You've got to be lucky and trust your instincts and judgment. And I've found that people all over the world are not that much different in the things they like and in the things they laugh and cry about. And if it makes me happy, there's a good chance that someone else is going to like it".
Though Willie and friends were no doubt the evening's most popular performers, former American Idol star Carrie Underwood won the top 'Video of the Year' award in Nashville for the third time in six years.