Will Smith To Team Up With Jaden Again

Will Smith is set to star alongside son Jaden Smith in a new sci-fi film, which will be directed by M. Night Shayamalan. 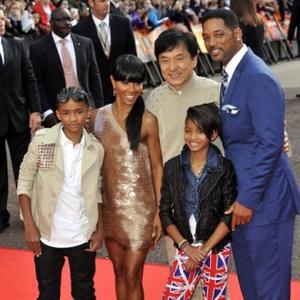 Will Smith is set to star alongside son Jaden Smith in a new sci-fi film.

The actor - who was one of the producers on the 2010 remake of 'The Karate Kid', starring Jaden - has signed to appear in director M. Night Shayamalan's latest movie, which is set 1,000 years into the future.

Jaden will play a boy who must find his way around an abandoned planet after his spaceship has crashed, with Will playing his estranged father.

Shyamalan said in a statement: "The chance to make a scary, science-fiction film starring Jaden and Will is my dream project."

Will and Shyamalan will produce the film - which is currently untitled - along with James Lassiter, Will's wife Jada Pinkett Smith and Ken Stovitz.

Despite Jaden being just 12, Will has previously said he is confident he can cope with the pressures of being a child star.

He said: "He grew up in this industry so it's not foreign to him. He understands that this is a family business. He didn't have the shock and the radical life change that child actors usually have coming into the business."

The father and son pair previously starred together in 2006's 'The Pursuit of Happyness'.