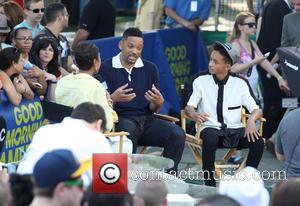 Picture: Will Smith, Jaden Smith and Robin Roberts - Will Smith and son, Jaden are interviewed during the GMA Summer Concert Series 2013 - New York...

The private elementary school Will Smith launched in California in 2008 has shut down.

The school caused a stir when it opened after campaigners claimed it was being used as a front for the teachings of the controversial Scientology organisation. The Smiths, whose two children Jaden and Willow used to attend the school, denied they were followers and insisted the academy had no religious affiliation.

However, it appears the celebrity ties were not enough to keep the school in business and the venue closed its doors for good on 28 June (13).

A source tells America's Star magazine, "Will and Jada put millions into it. But there's a lot more to a school than money - if people don't agree with the teaching material, then all the money in the world won't save it."

No official reason has been given for the academy's closure and the Hollywood couple has yet to comment on the story.