The film forced him to face a lot of things.

In the new drama Collateral Beauty, Will Smith plays a man who, after his daughter dies, begins to question the nature of love, time and death itself. And he found an unexpected resonance in his own life while he was making the film. 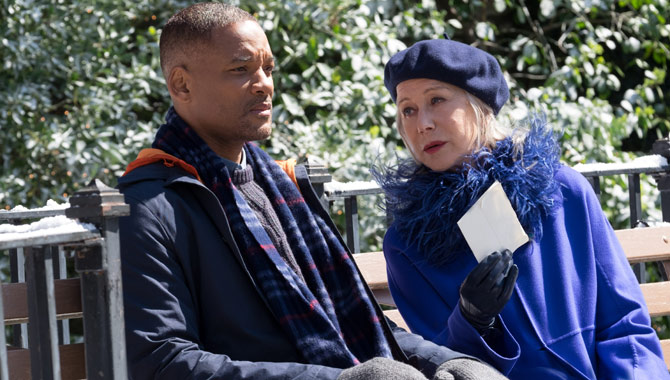 Will Smith and Helen Mirren in Collateral Beauty

"When I got the role, I loved that this was a guy who had the world on a string," he says. "Everything was perfect, then he suffered a loss and had to make his way back to even believing there was a possibility to have joy again. Then about two weeks into the preparation for the film, my father was diagnosed with cancer. First, you know, it stunned me, and then it was the magical work of the universe. I could not believe that this was the film I was working on, and I was forced to face my father's mortality."

Smith decided to work with his father as he researched the role. "We were talking and sharing everything," he says. "So this film for me is the most personal and beautiful journey. I was studying all the things with the character, who goes deeply into Christianity, Judaism and Buddhism, and everything about God, trying to understand. But my father and I were sharing it during that time, so for me the performance, the movie and the ideas are so deeply personal."


He feels that it was one of those surprising convergences. "When art and life come together in that way," he says, "and when you create something that could potentially help people get through difficult times, it's fantastic. I hope people can feel the depth and power of what's going on in the film."

And he feels like he got more out of this movie than any other project he's worked on. "Like, I don't need the box office to be huge on this film," he says. "I don't need to win any awards, you know? I don't care. It was the film that I worked on that I was actually able to comfortably and beautifully say goodbye to my father."

He laughs when he thinks about how far he has come in his career. "That character from the Fresh Prince of Bel-Air is who I was 26 years ago," Smith says. "I'm 48 now, so it's a really different time in my life. I wouldn't have it any other way, I love being able to make people smile and cheer over that, but I also am going to boldly go into a new creation."