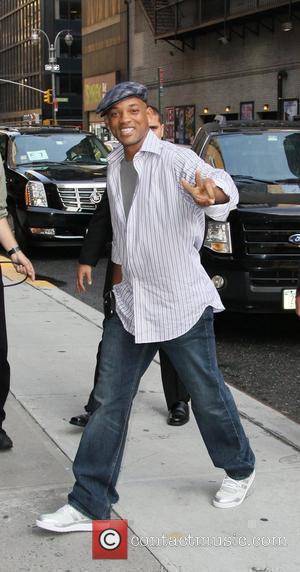 Picture: Will Smith outside the Ed Sullivan Theater for the 'Late Show With David Letterman' New York City, USA - 15.06.09

Will Smith and Jada Pinkett Smith's daughter Willow made sure she was well prepared for her TV debut - she turned to her famous father for acting advice.
Eight-year-old Willow - who appeared in her dad's 2007 film I Am Legend and voiced a character alongside her mother in hit animated film Madagascar: Escape 2 Africa - is guest starring in a one-hour episode of Nickelodeon's True Jackson, VP later this month (25Jul09).
And Men In Black star Smith was determined to impart his acting wisdom to his young daughter.
Willow tells Access Hollywood, “He’s giving me advice like, ‘Willow, stay in the moment! You have this, you got it down. Just stay in the moment. Okay, now go out there and kill it.’”