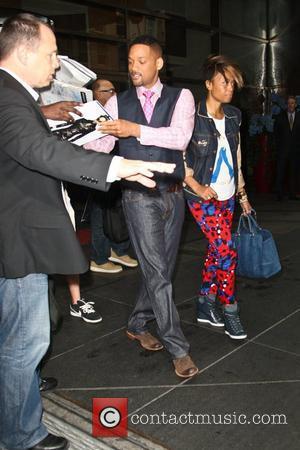 Picture: Will Smith signs autographs for fans as he leaves his hotel in Midtown Manhattan. New York City, USA - 24.05.12

Here come the Men in Black. Just as it looked as though Avengers would remain undefeated in the battle of the box office heroes, Will Smith and Tommy Lee Jones came along with the third instalment in the Men in Black movie franchise, toppling Marvel Studios' record-breaking blockbuster from the top of the charts. Men In Black 3 opened in North America over the weekend, cashing in over $55 million, according to BBC News today (May 28, 2012).

Its stellar profit-boosting weekend will have been aided by the fact that it was Memorial Day Holiday weekend in the USA and Avengers has enjoyed a decent reign at the top of the charts, with cumulative sales of $514 million in North America, to date. In its fourth week of release, though, Avengers has slipped to second, overtaken by the first Men In Black movie for a decade. There was a big drop from second place ($37 million) to Battleship's takings in third place ($10.8 million), with Sacha Baron Cohen's controversial comedy The DICtator just behind in fourth ($9.6 million).

Will Smith and Tommy Lee Jones both returned to the Men in Black franchise, as Agent J and Agent K, respectively. This time, the two men in black are battling a new alien enemy that travels back in time in an attempt to eradicate a younger Agent K (played by JOSH BROLIN).