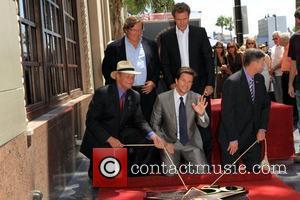 Picture: Will Ferrell and Mark Wahlberg is honored on The Hollywood Walk of Fame with the 2414th Star. Los Angeles, California - 29.07.10

Comedian Will Ferrell poked fun at Mark Wahlberg as he was honoured with a star on the Hollywood Walk of Fame - by pretending to confuse him with fellow action man Matt Damon.
Wahlberg was presented with the 2,414th star on the famous Hollywood Boulevard on Thursday (29Jul10) in recognition of his longstanding career as a rapper, underwear model, actor and producer.
His The Other Guys co-star Ferrell was on hand to provide the chuckles at the ceremony when he jokingly praised Wahlberg for Damon's hit Jason Bourne franchise.
He told the audience, "I'm glad to be here. I first became a fan of Mark's when I bought his workout video. And I love all your Bourne movies."
And The Departed star, who was joined at the ceremony by his wife Rhea and their four kids, admitted he couldn't quite believe he was being immortalised on the Walk of Fame.
Wahlberg said, "I'm so happy my kids are sitting through this. When I heard I was getting this star, I felt like it was a practical joke."