Will Ferrell, as Ron Burgundy, attends the Canadian curling trials in Winnipeg on Sunday (Dec 1st). 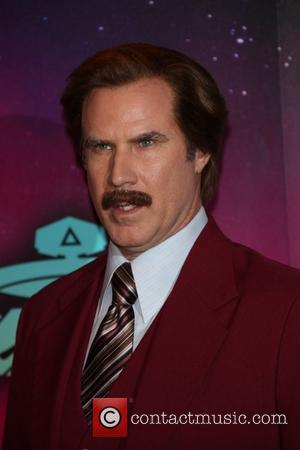 Ron Burgundy travelled north of the border this past weekend to lend a helping hand to the Canadian curling team.

The character Will Ferrell created stopped off in Winnipeg, wearing his trademark 'Anchorman' red suit accompanied with his well-known thick moustache, and even had a go at the winter sport.

Adding, "The limo ride from the airport was first class all the way. They had roast pig for me. An entire roasted pig there in the limo."

Ferrell's visit to Canada was to promote the upcoming sequel 'Anchorman 2: The Legend Continues', prior to this, on Saturday night he stopped off at a local news station in Bismarck, N.D., to take part in a live broadcast.

Burgundy has taken on several new roles as of late and his latest was a TSN curling broadcaster alongside Vic Rauter to discuss the opening draw of the Olympic trials, and 11,000 fans came to see the hilarious news anchor.

When asked if he brought anything to the announcers table, Burgundy replied, "I think I can bring a certain amount of dignity and class, I know I smell good."

Ron also admitted he picked this event over knife throwing in Saskatchewan, explaining that, "I took curling because curling is where my heart is. I've always loved curling, ever since I was a kid growing up in Hagglesworth, Iowa."

He jokingly continued, "We used to do a curling segment on the news in San Diego. No one watched it. In fact viewership plummeted 33% during those times. But I stuck with it. I told our producers we've got to stick with curling, it's the future."

Watch a video of Ron Burgundy attending the curling trials below