Ferrell: 'Stunt Nuts Were Modelled On Mine' 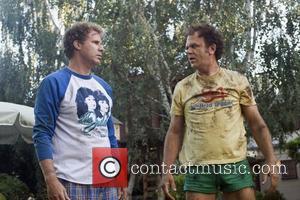 Funnyman Will Ferrell insists the testicles that feature in his new movie STEP BROTHERS aren't his - but they were modelled on his "nut sack".
In one hilarious scene in the new comedy, Ferrell's character appears to place his genitals on a drum skin to upset his sibling, played by John C. Reilly.
And Ferrell insists the item used was a prosthesis.
He says, "They're not real but my balls were modelled. I put them in hot wax to build the mould."
And now he has the "stunt nut sack" at home: "I asked the prop people, 'Could I please have my stunt nuts to take as gift from the movie?' and they said no problem, so they're at home.
"They've been brought out on a few occasions; we had a dinner party... and the subject of the stunt balls came up and I went, 'I have them, do you want to see them?'
"They got passed around by 20 people... They'll be in the Smithsonian (Museum) one day."