Ferrell Recalls His Days As A 'Horrible' Bank Teller 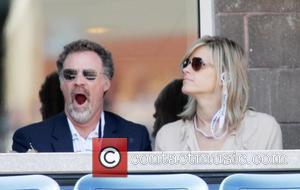 OLD SCHOOL star Will Ferrell was so bad at his job as a bank teller before he found success as a comedian, he often supported customer complaints against him.

The 37-year-old funnyman was so unimpressed with his own skills that he's surprised he lasted a year and a half in the job.

He says, "My first day of work was the worst day of my life. I would have repeat customers who'd actually ask for the manager and then, in front of the manager, chew me out and tell them how I'm the worst teller.

"I would just stand there and go, 'He's absolutely right. I'm horrible.'

"I was $300 short on my first day. But I didn't take the money... There was another teller that was $300 over so they thought maybe we just had traded money. I knew we hadn't so I just went, 'Yeah, that probably was it.'

"And then the next day I was $280 short and the manager was like, 'What's your problem?' I was fine from that point on."