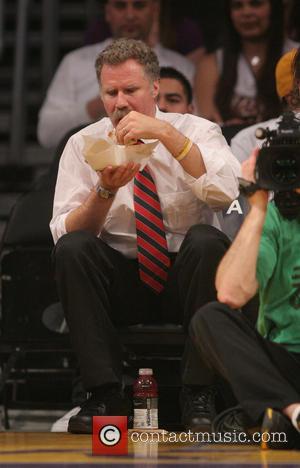 Will Ferrell ejects Shaq O’Neal from a Lakers game? Has the world gone entirely topsy turvy? Apparently not. Last night (February 12, 2013), Will Ferrell donned one of the iconic red jackets worn by the security at Lakers games at the Staples Centre and took on the role of one of the serious, surly men that make sure everything runs smoothly and checks that nothing gets out of hand during the games. The name badge that Will was wearing was slightly less ‘iconic’ than the red coat, however and read “Ted Vagina.”

Ferrell somehow managed not to crack a smile as he played the role of one of the Staples Center’s security bods. Sporting cropped hair and an impressive moustache, in the YouTube video, Ferrell can be seen eyeballing members of the audience and letting them know he’s watching them. Then, he waves at one audience member to leave his seat and ushers the punter towards him. As the man stands up, his gargantuan frame is all too familiar. It’s Shaquille O’Neal! The former baseball player willingly places his hands behind his back as Ferrell ejects him from the stadium.

We’re not sure exactly what Shaq had done wrong but we’ll wager Ferrell had caught the YouTube clip of O’Neal miming along to Beyonce’s Super Bowl performance. That was pretty criminal, right?